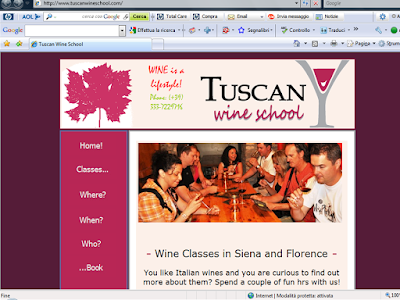 It's, of course, with huge joy that I announce the birth of a new project for 2010, the Tuscan Wine School (http://www.tuscanwineschool.com).
In fact, this idea is a result of a growing desire to launch a complimentary activity to the wine tours, and the moment has finally arrived!
Not to worry, I will still be giving wine tours even if I'll be reducing the amount...
I'll still make sure to be your Tuscan host, so when you'll need advice on anything you can still count on me and email me for information. In addition to this, my network of wine tour guides has enlarged and has proved itself to be the best Tucany has to offer so by now I'm surrounded by increadible professionists that I can highly recommend! So let me know, and I'll give you the name of the perfect host for you!
So, I hope to see you the next time you come to Italy, and make sure to tell your friends who might be coming to make sure to come see me and experience this phenomenal new wine event in Tuscany!
I wish you all a happy Holiday Season!
Posted by Rebecca Wine Links to this post

The Italians and their bidet 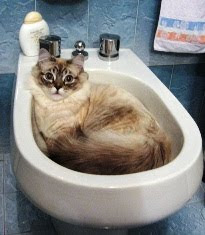 So this is what cracks up most Western visitors when they visit Italy for the first time. The bidet. It’s not an uncommon question that I get during the tours, as it reflects a cultural difference and the curiosity of understanding its usage is given by the frequent exposure to these objects when in Italy. In fact, bidets can be found in all Italian accommodations, both private and public.
Other European countries, just North of the Alps, don’t commonly have this phenomenon of bidets in water closets. This apparently useless device wouldn't logically have any right to take up space in the Northern countries’ often space-deprived bathrooms. As other Europeans, Italians also suffer from space restrictions. But as it is, the Italians would by no means question the importance of the bidet. In fact, they are terrified when travelling abroad to find no such thing as the bidet and most oftenly conclude that the rest of the World must be living in a deprived state of hygienic primitivity.
So this posting comes from the fact that I often get the question of, “so what’s that extra object we keep seeing in the bathrooms”? Some suggest it’s to wash feet in, others that it might be a mini bathtub for kids, or to hand-wash clothes in. That’s not far off from a reality some years ago when a friend of mine had to wash her dishes in the bidet because she had no kitchen! However, the bidet is intended to provide for personal hygiene, on a daily basis.
Having talked to many Italians about it, I have come to understand that it is common to use the bidet several times a day. I’ve been explained that it might not be necessary to do an integral cleaning (like a shower or a bath) every day, so the bidet helps to spot-clean on non-bathing days. A lot of my friends couldn’t possibly shower every day, as it would take too long, especially if they consider washing their hair…
I’m personally from the primitive North, so this logic was quite new to me. However, I’ve come to see the functionality of the bidet, even though I scandalously have a tendency to fill it up with useless toiletries that have no business in the bidet!
Posted by Rebecca Wine Links to this post