One of the things that trill me the most when I meet people on the tours I run is to hear the life stories of my guests. I’m fascinated to know who they are, where they are from, what they do (OMG, so many jobs out there I didn’t realize existed) to how they met or unmet their significant others. There’s always something new to learn and that makes it exciting!

I once before attempted to write about how Pierre and I met, because it is indeed a very sweet story that must be told. I called it a drunk romance, but in fact we are for the most time quite sober so I'm summing it up quickly and changing the title!
It was back in 2009 and I was running day tours to various regions and every day was like mentioned atop – a discovery of people and a sharing of wine stories in the Tuscan wine country. One morning, as usual, I’m picking up my group of people who are yet unknown to me and we head out to the Chianti Classico region. On the tour is also a French wine maker and I’m a bit nervous thinking he could come with questions I couldn’t answer. Luckily he kept low profile for the most part and I could proceed normally with my tour explaining the area to people with and without prior knowledge about wine. Pierre did ask me what Chianti meant, something we still joke about today – as I wasn’t quite sure and said something along the lines of it being a place name for the district with probable Etruscan origins. I wasn’t completely convinced myself of the correctness of the answer, but luckily it proved to be quite right.
Second day went to Montalcino with a new group of future friends. Pierre was with me for 3 days and so this second day was pleasant as the group was smaller and we had a better chance of talking. I discovered that Pierre was studying Master of Wine and head enologist of a winery in St. Emilion – that was why he had come to Florence to study Italian wines.
The third day was a discovery of San Gimignano’s white wines. Again we had a new group of fellow wine tourists, and Pierre and I definitely had a good feeling going on. The group was very animated (and quite drunk by the end of the day). Pierre attempted to see the bottling room at Panizzi winery to which he was shown to the bathroom (little incomprehension of his charming French accent). That provided us all with some good laughs.
After the tour ended back in Florence Pierre and I went for a glass of wine at my favorite wine bar La Volpe e L’Uva and had a chance to talk and get to know each other. We tasted a few different wines together. It was definitely love at first sip!


And so this is how the story begins for us 2 winos. For a year Skype was really useful to keep us in contact between Bordeaux and Tuscany. Frequent trips were made back and forth. Pierre finally wraps up his work situation and moves to Tuscany, but not before proposing! And so out the window with my independent woman “I’m never gonna get married”-crap. Two little boys later here we are, happily living our common life wrapped in good wines and foods in the midst of Tuscany. Best thing is that we both get to share our passion through our travel agency “Grape Tours” through which we now both run wine tours in Tuscany and in France (that would be me and Pierre on the grapes:) 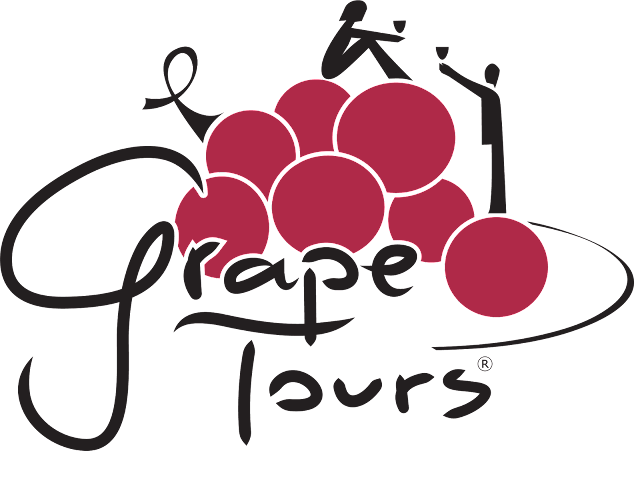