Butcher for a day

If you really love meat and really want to immerse yourself into the world of great meat with world famous butcher Dario Cecchini, it's not enough to just visit his butcher shop in Panzano in Chianti. You HAVE TO do the special program called butcher for a day, where you will be introduced to Dario's philosophy, meet his people and behind the curtains of the operation of the coolest butcher shop ever! 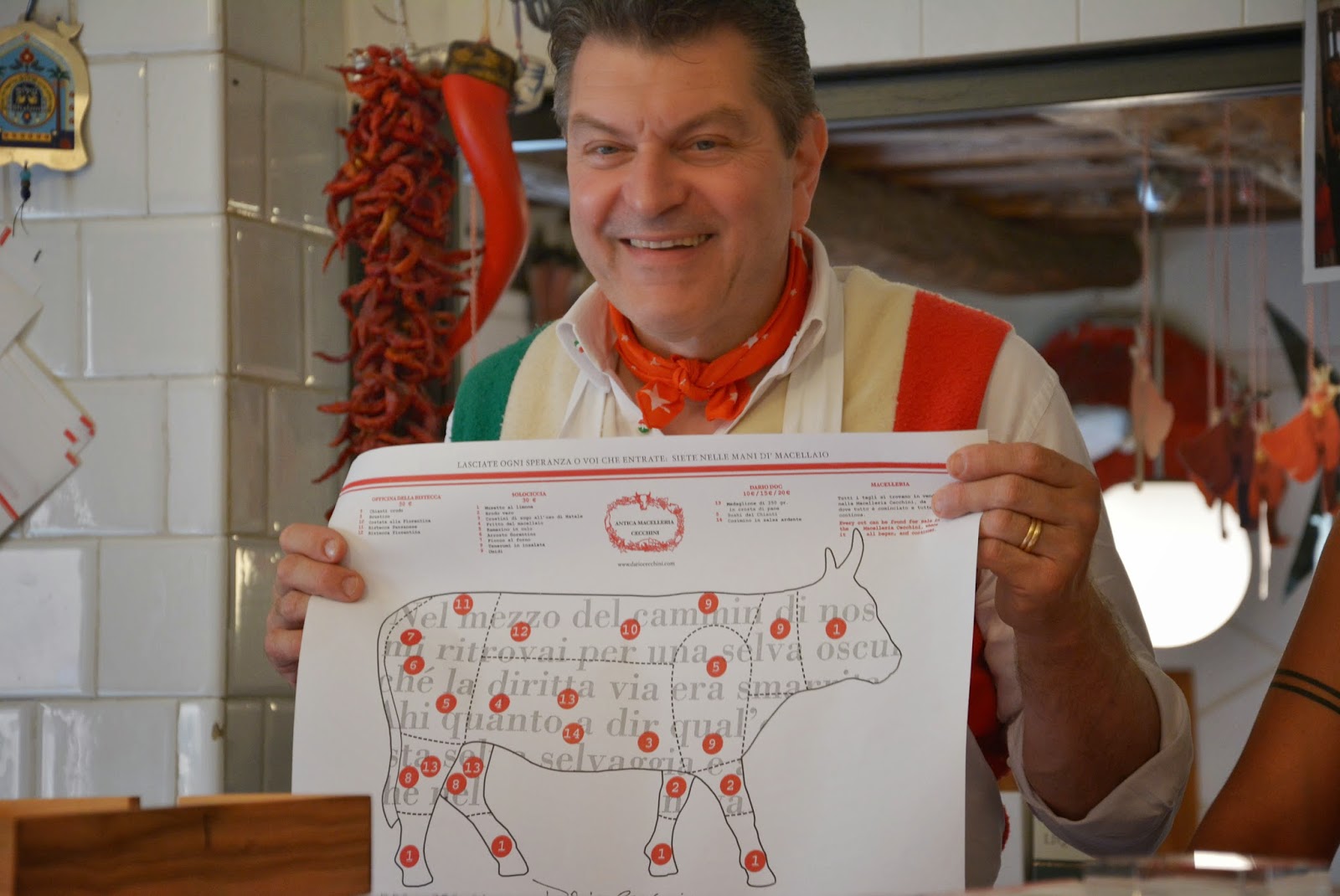 Dario explains how he's been a butcher for 250 yrs (or at least personally the last 40 of them) as the profession was his farther's and his father's father's. He emphasises the respect for the animal, how important it is to first give the beasts a decent life time in good conditions, then a fairly humane death, and lastly a butcher who understands to use every piece without wastage.

Butcher for a day is a day of engaging in and understanding this concept, so the first thing we do is to hop into Dario's jeep and drive down to the pasture where the Chianina cows are hanging out. 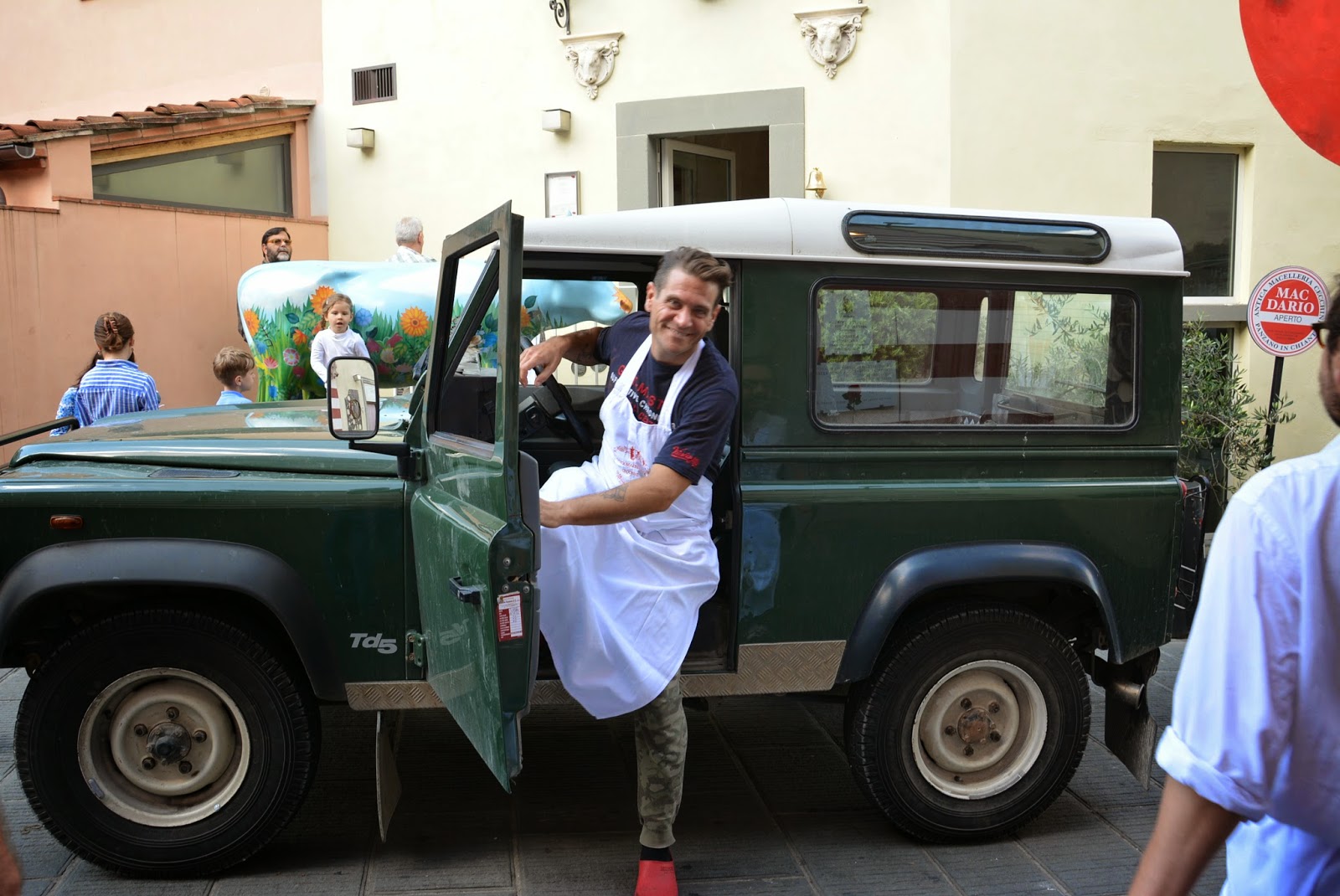 We're accompanied by Nicola, one of the guys on Dario's great team who was a real estate agent in the real world. Then he had a close to fatal cycling accident and as saw his life flashed in front of him, he decided even after age 50 to change the course and dedicate himself to food - his greatest passion in life. 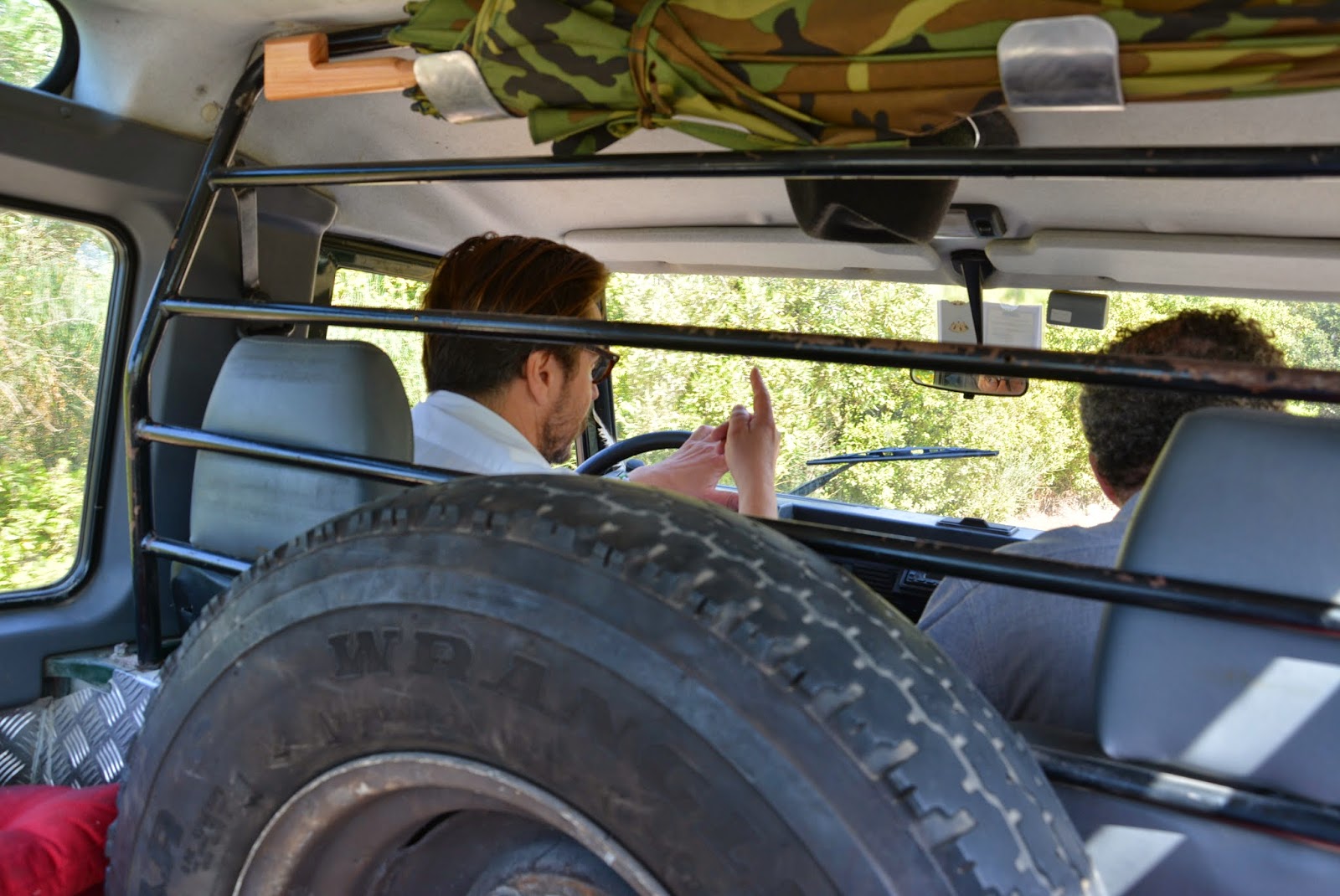 We're standing amidst the Conca d'Oro valley just South of Panzano in Chianti. Those vineyards we just drove through and you see in the background belong to the Fontodi estate, the biggest producer in this valley of Panzano that is almost exclusively farmed organically. 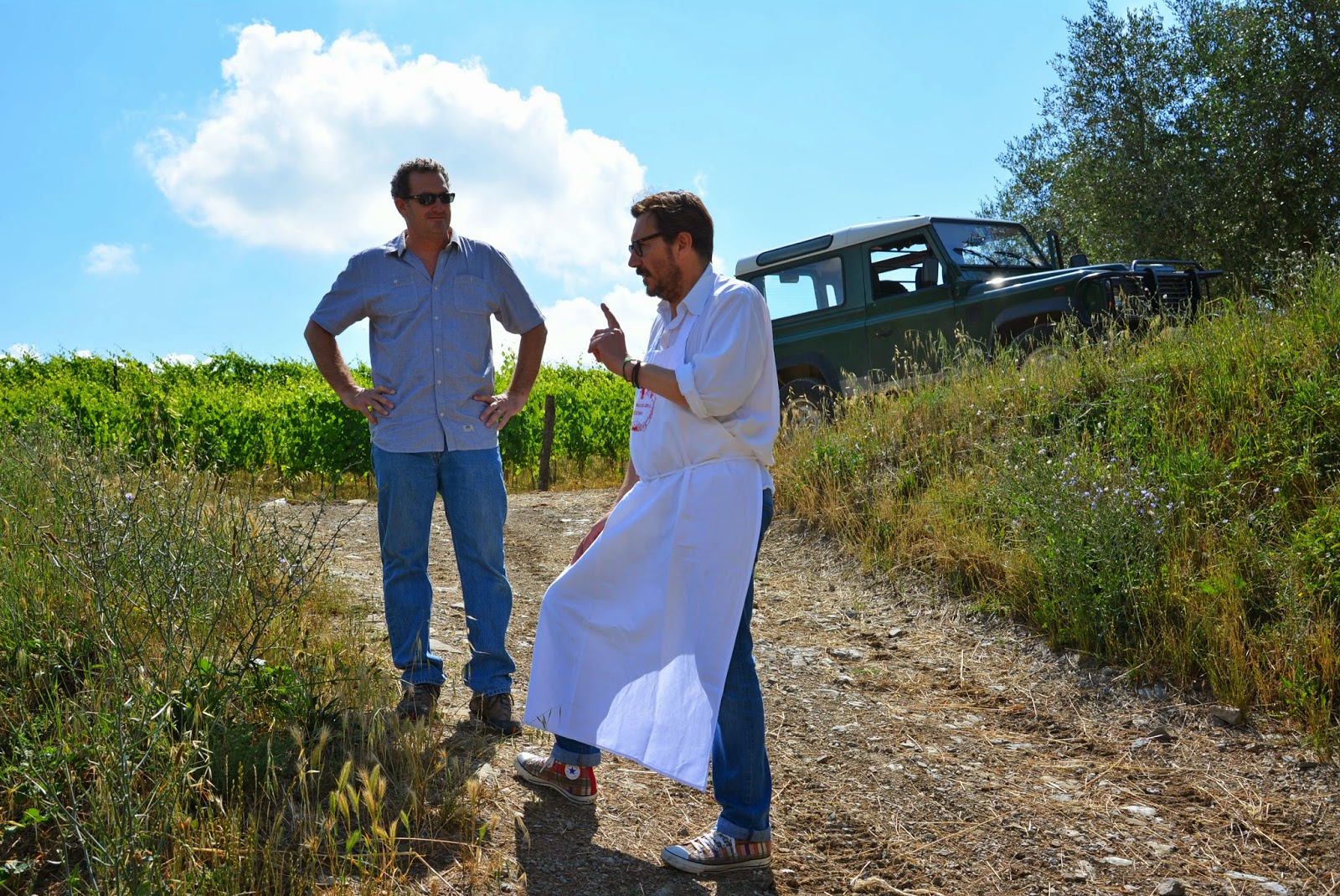 Tuscany is famous for it's Chianina race meat - these beautiful white animals you see in the next pictures. Well, the Chianina is an ancient race in Tuscany and was used in the past as tractors, so they were work cows and helped plough the fields. When they had lived a life of work and procreation, they would follow the natural order of things and be killed to feed the families living in the country side. 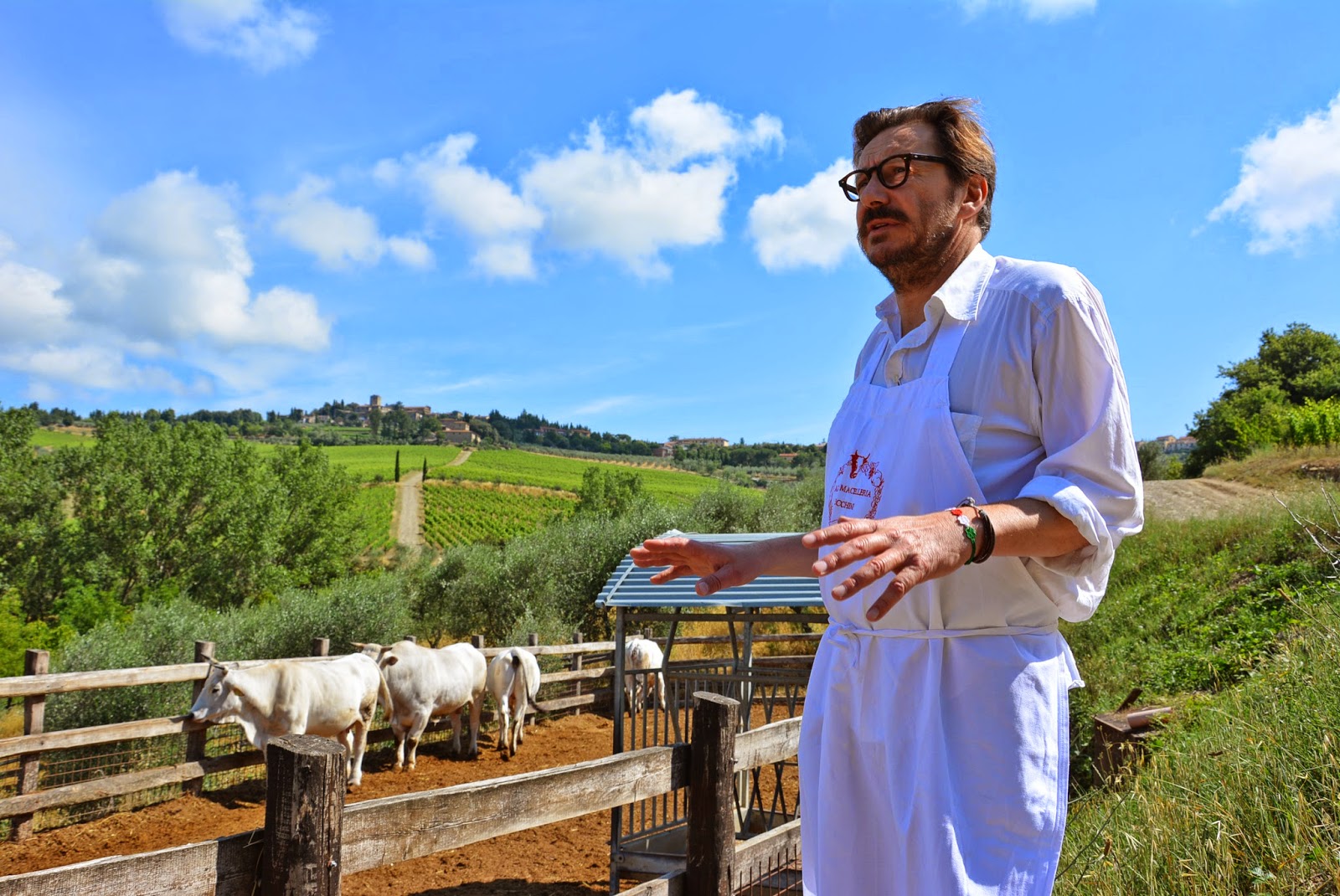 For this reason their meat was quite lean and didn't have the taste that we modern consumers associate with beef. In fact, the Chianina meat has a very particular flavour that you would have to get used to.
So it's important to understand that Chianina meat in Tuscany is actually not very common - there are very few breeders and the meat is very expensive. The word is used often to attract tourists to a menu, but there is often no traceability nor guarantee that the meat is indeed from Chianina. 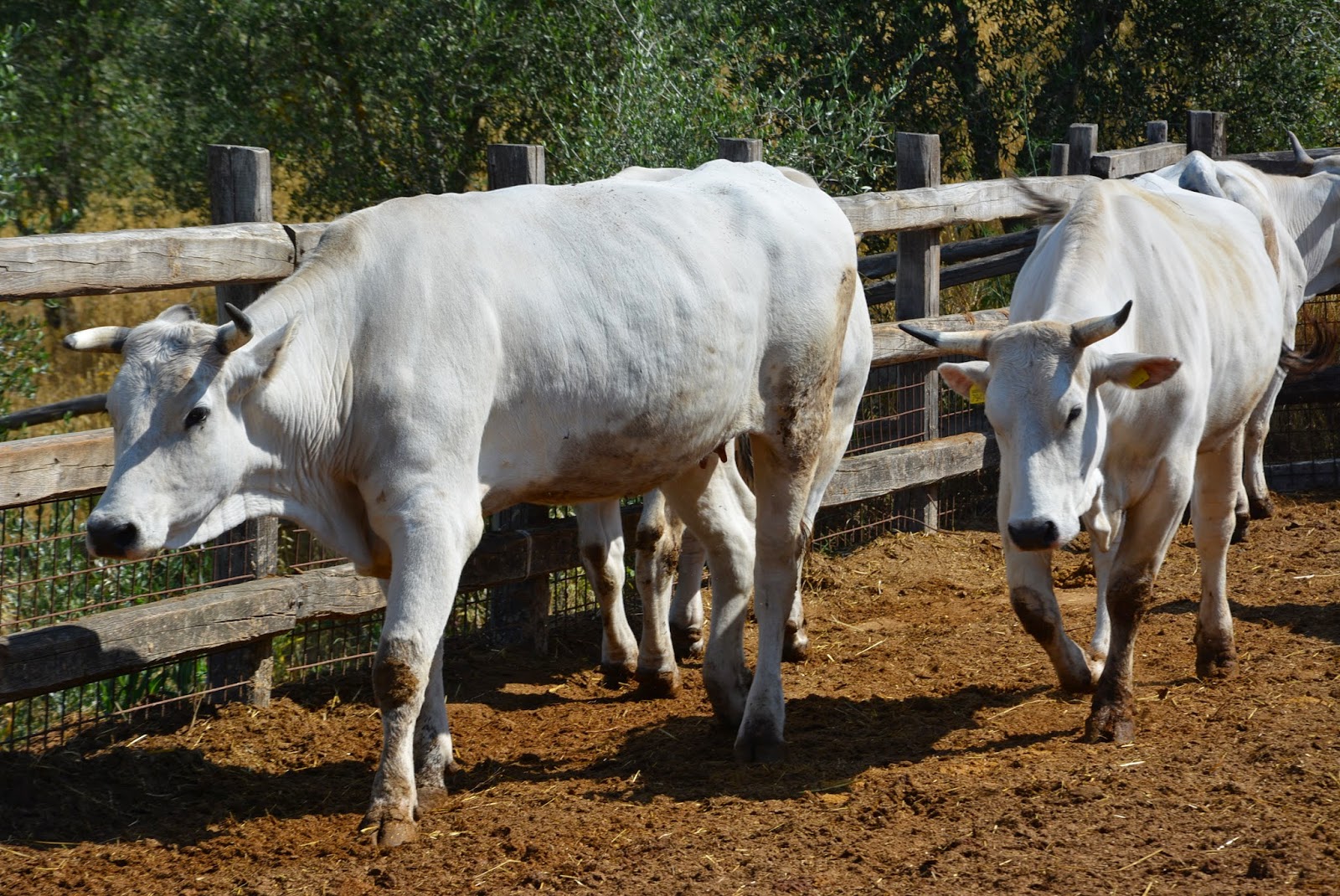 Dario Cecchini himself keeps these Chianina for mere tradition and love for the animals. Here he gives them a life of around 7-8 yrs and then he slaughters them only at the end of their fertile life. This means that he only kills a couple a year and, in fact, this meat is not what ends up in the restaurant - it's for special occasions or friends (so make sure to sign up on the list of good friends :) ) 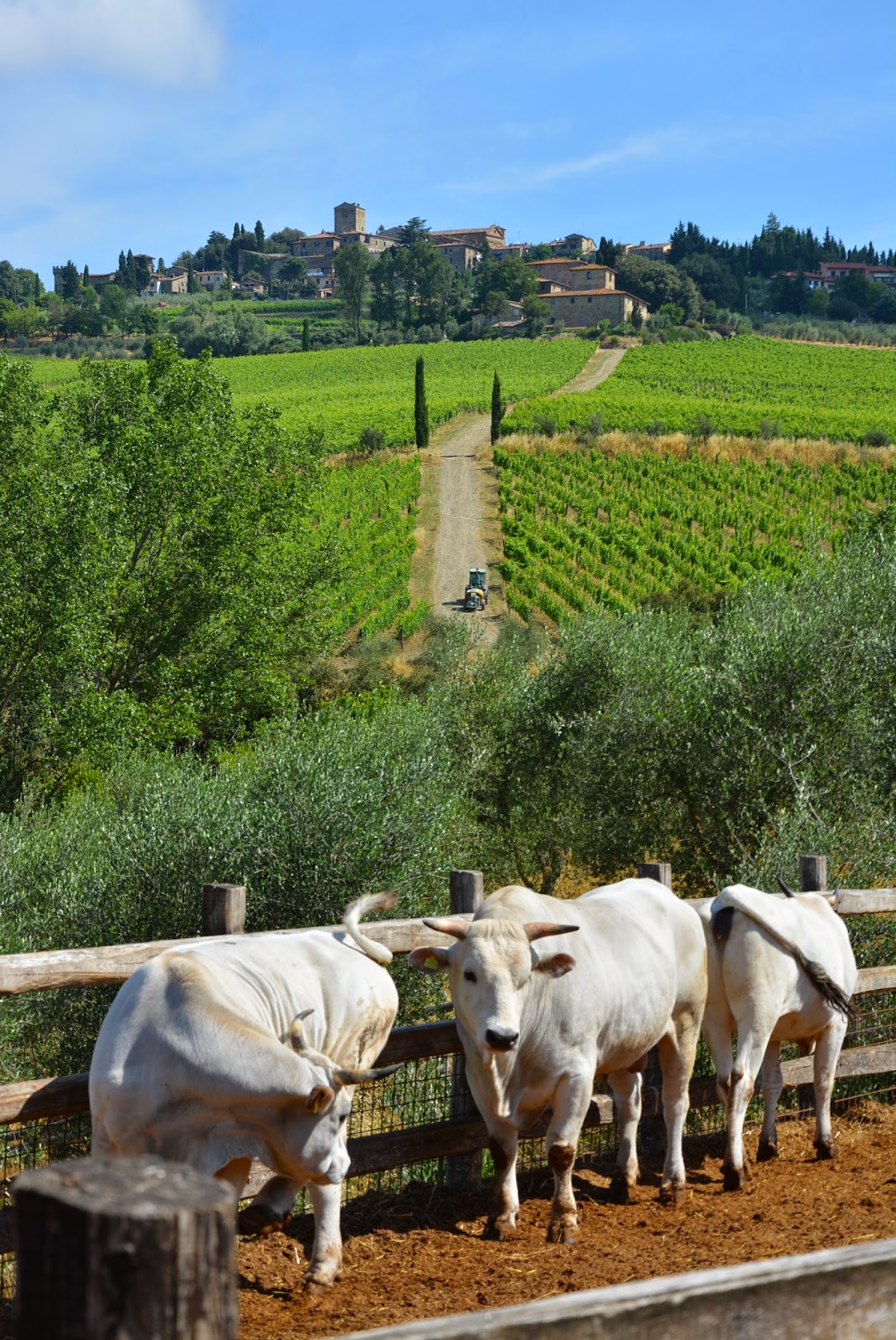 Dario is no racist, he says - so it is not important for him to bring the Chianina beef to the table.
Dario's cattle is raised in Spain where there are larger pastures of land for the animals and where regulations ensure a more humane death. He has deliveries come in from his contact in Spain every week to his warehouse in Panzano where the meat is hung to dry for around a month and is then cut into the various pieces used in the butcher shop and in Dario's restaurants in Panzano. 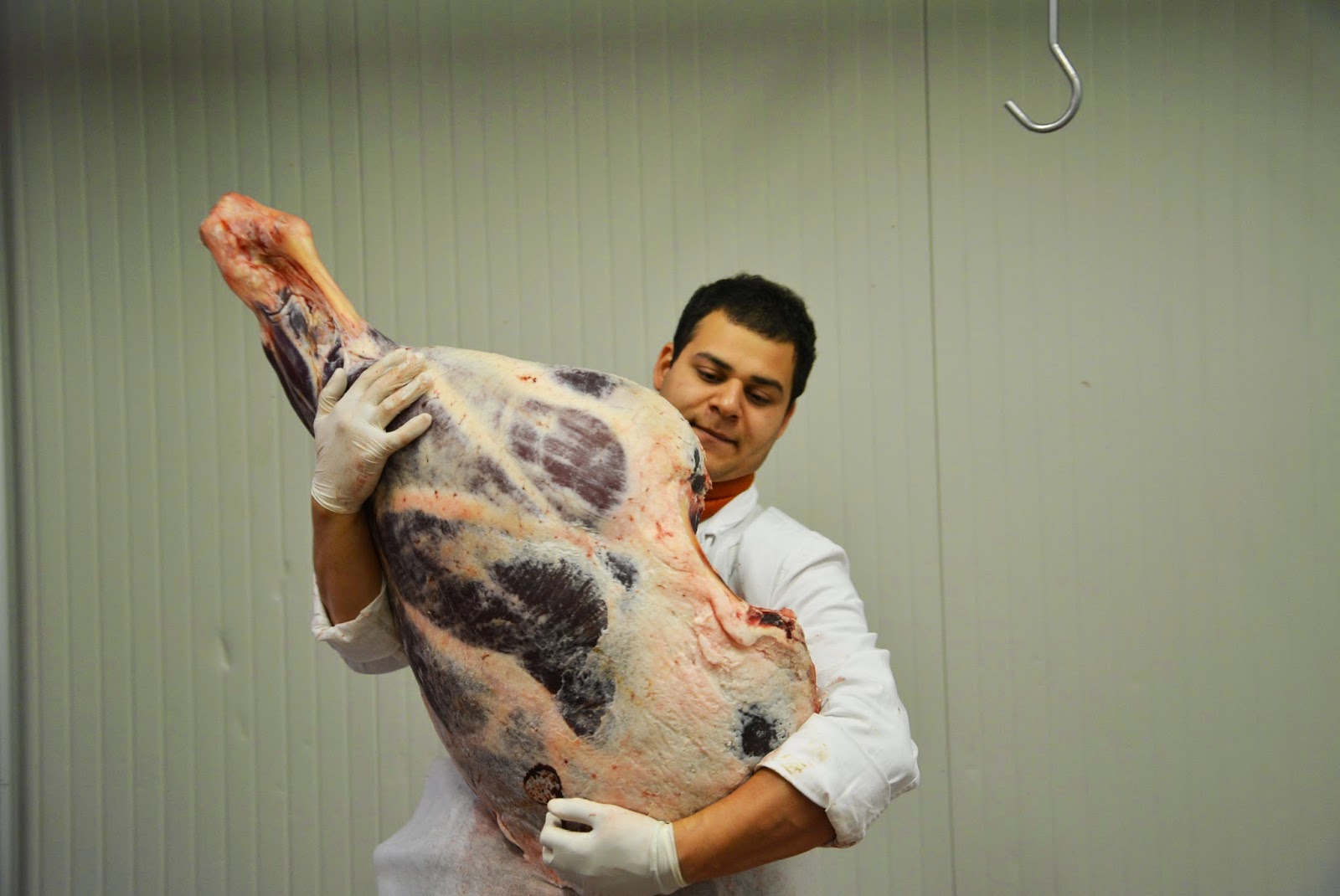 This cow's leg weighs around 50 kilos! During your Butcher for a day you don't get to handle the knives, but you do get to see the dissection of the thigh and hear what all the different pieces are used for. Later lunch is served and it's really fun to know that the Panzanese steak that Dario is so famous for actually comes from the bottom (ass) fn the leg - ha ha! 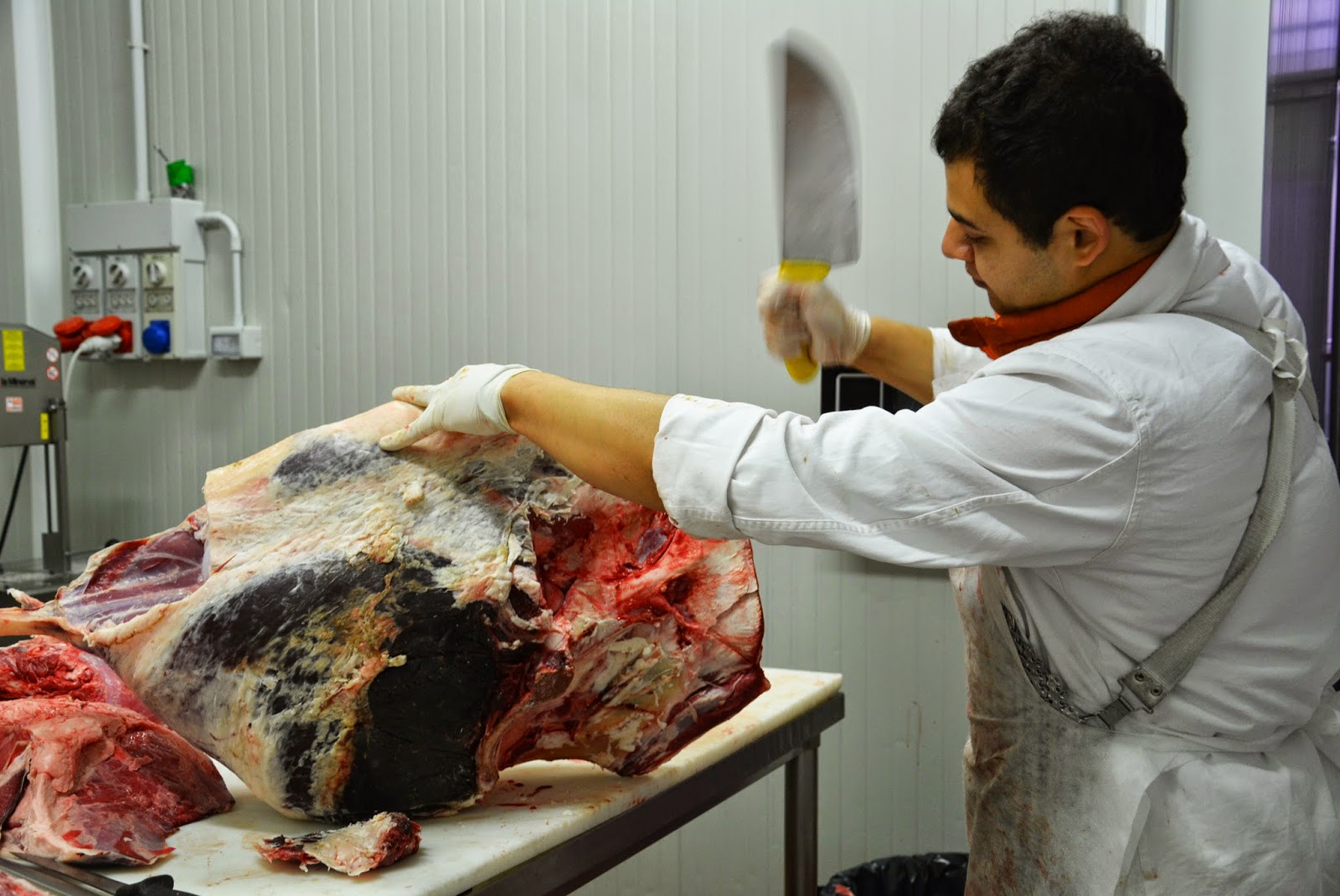 Nicola explains the Bistecca alla Fiorentina as being the spine part towards the bottom (ass) that has the sirloin and fillet side to it, the Costata is the continuation of the spinal cord where there is only a Sirloin side. These 3 steaks are served after the course (and also if you go to Dario's Officina della Bistecca), together with other delicious parts. 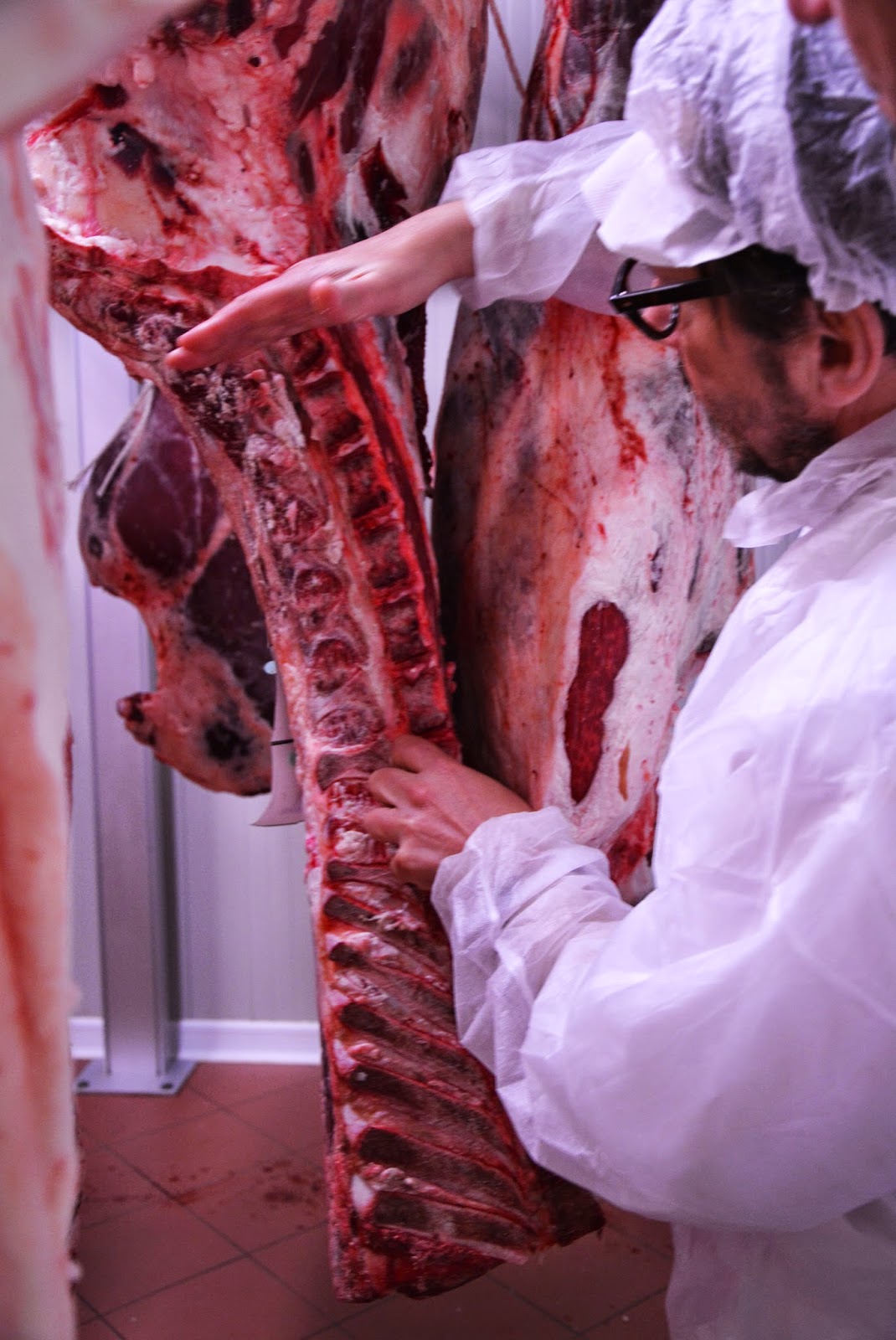 We now leave the refreshing warehouse and make our way back up to the butcher shop where we get to participate in one of Dario's famous recipes; the Chianti Butter. Dario has a great deal of humour when he names things such as this paté that he makes from lard, as of course the cattle that we've seen don't make milk so actual butter is not really used in this region. 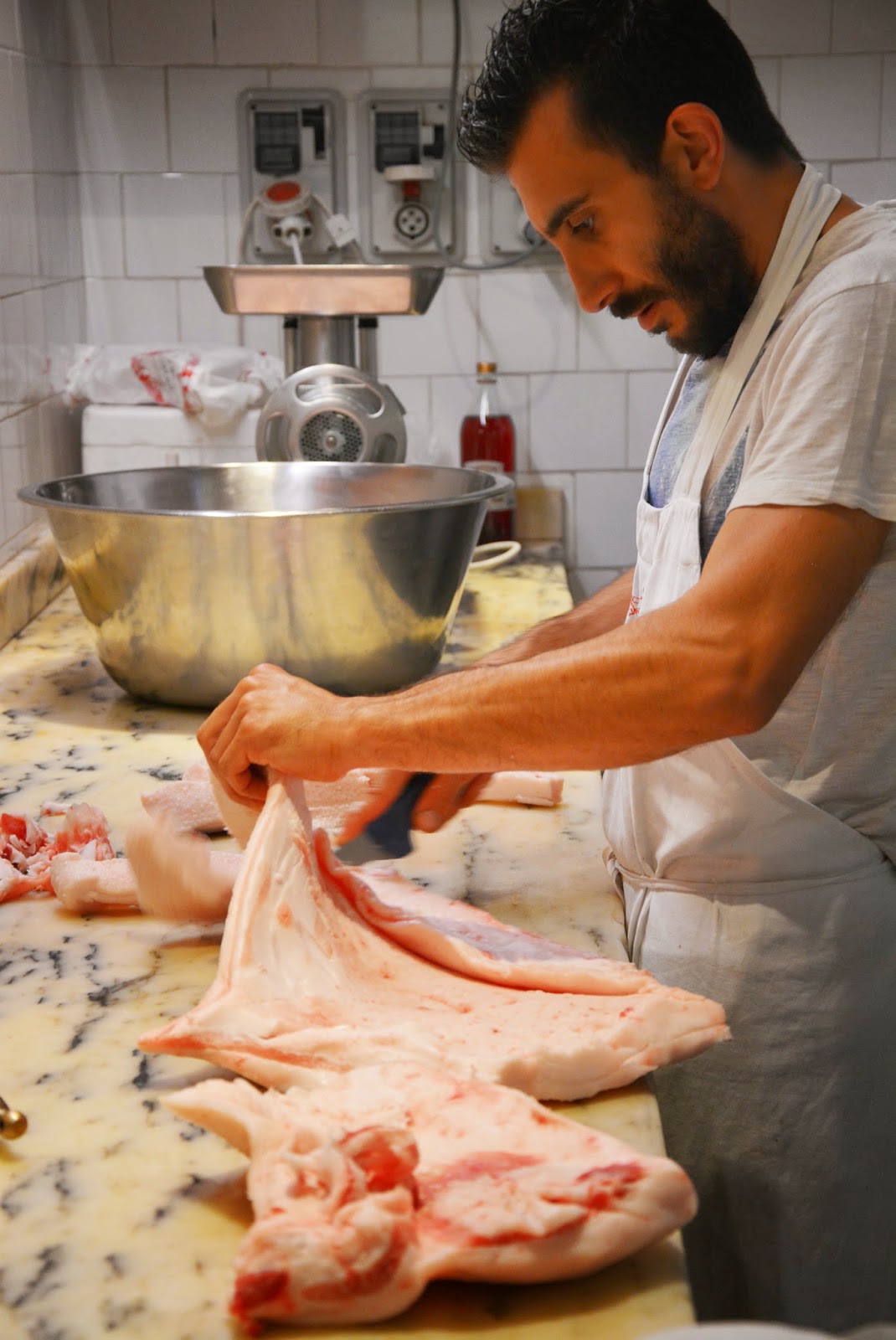 The lard gets cut up into pieces and then we grind it, after which rosemary, salt, pepper and other lovely aromas are added (I won't give you the exact recipe - you'll have to do the course to get the actual recipe from Dario himself!). This paté can be spread on bread or gives a great deal of flavour if used in cooking. 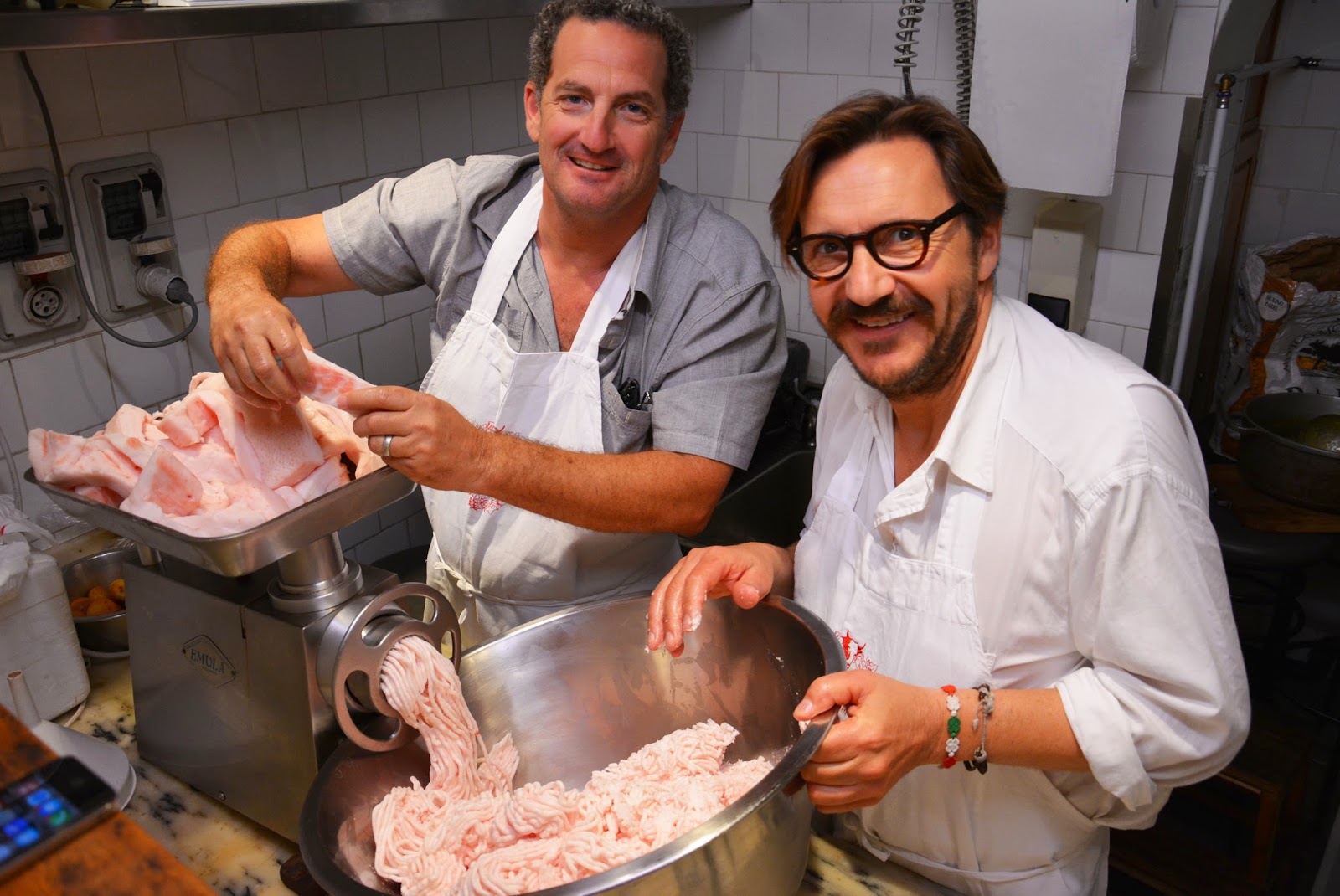 When you're all done with your course, you get to keep your apron as a souvenir and to remind you that you've actually witnessed the operations behind the butcher shop. Dario signs your apron and you are now his ambassador for good meat and will 1) never eat veal again 2) never buy cheap meat in the super market because you won't trust it anymore 3) if you do, you'll check where it comes from and be very skeptical and probably not enjoy it 4) be relieved if you find a local butcher to go to and you will ask questions about the animal's lives and the different cuts. 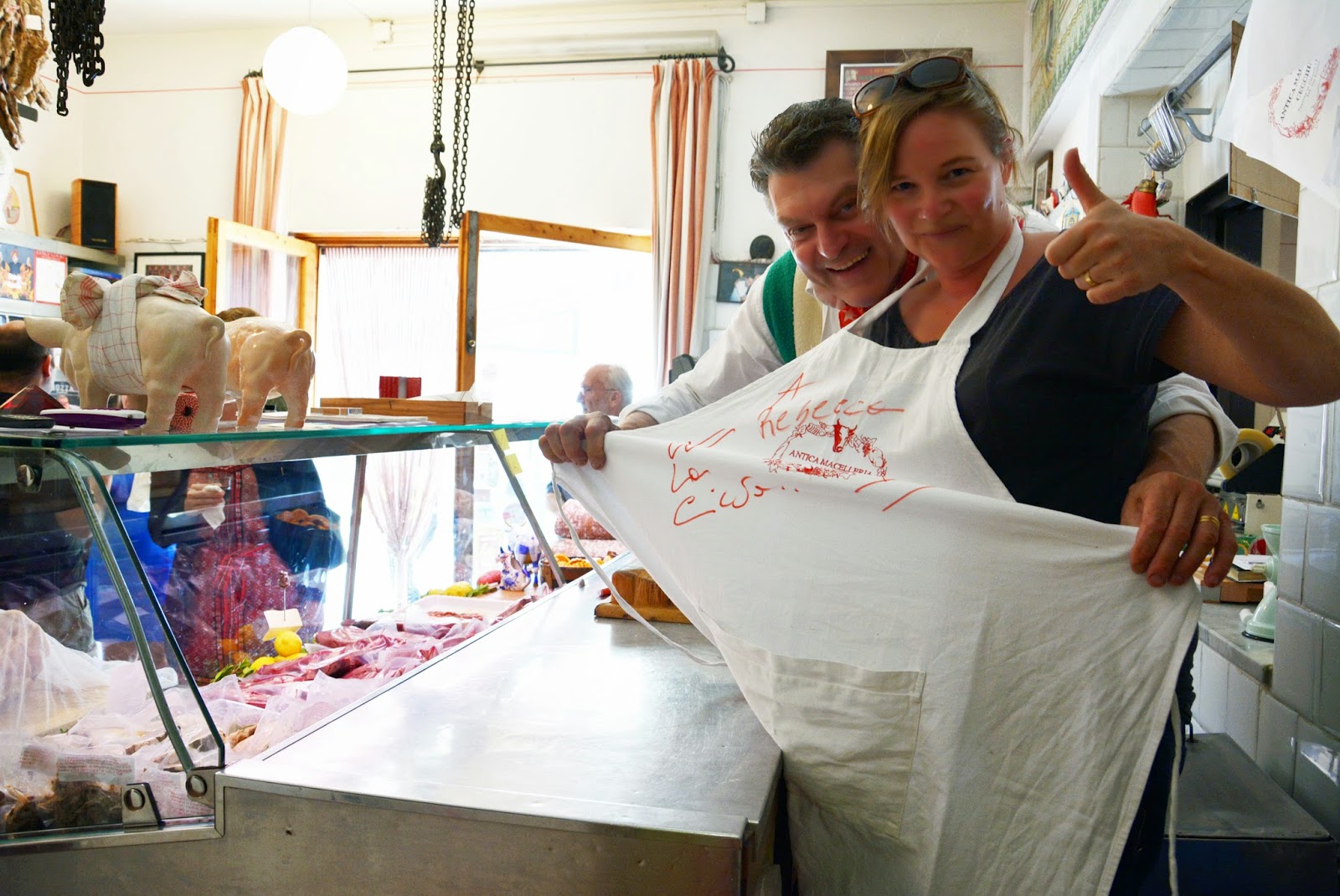 A wonderful meal is served up after the course and you actually won't be leaving until sometime in the afternoon when you've tasted the difference, the quality meat that Dario serves up and his recipes are phenomenal. So when in Chianti, don't forget to do your Butcher for a day!

If you don't have the time for it, join our Super Chianti wine tour from Florence and enjoy a unique tasting lunch in the butcher shop!
Posted by Rebecca Wine