It is wine trade show time in Tuscany. It starts with the anteprime Vernaccia di San Gimignano and Vino Nobile di Montepulciano (always the same days!) then it's Chianti Classico Collection time in Florence at Stazione Leopolda and it ends with Brunello di Montalcino. The events are organised by the Consortiums of the regions and wineries may participate if they please (actually quite a lot opt not to). Those who do can bring their regional wines (so the free IGT wines are not really on show) and can bring the new vintages even if not yet released nor in bottle (so barrel samples).
It's a great occasion for us winos to say hello to wineries we know and to ones we may want to get to know more of...and, of course, to taste wines side by side comparing one producer to another is kind of fun, too.
So how do you get in? You're really supposed to be of the trade...but where there is a huge wine passion there is a way. Contact the Consortiums (see links above) a few months before the shows (so November - December) and beg...

Step 1: receive a glass and wear it around your neck in a fashionable glass-holder! 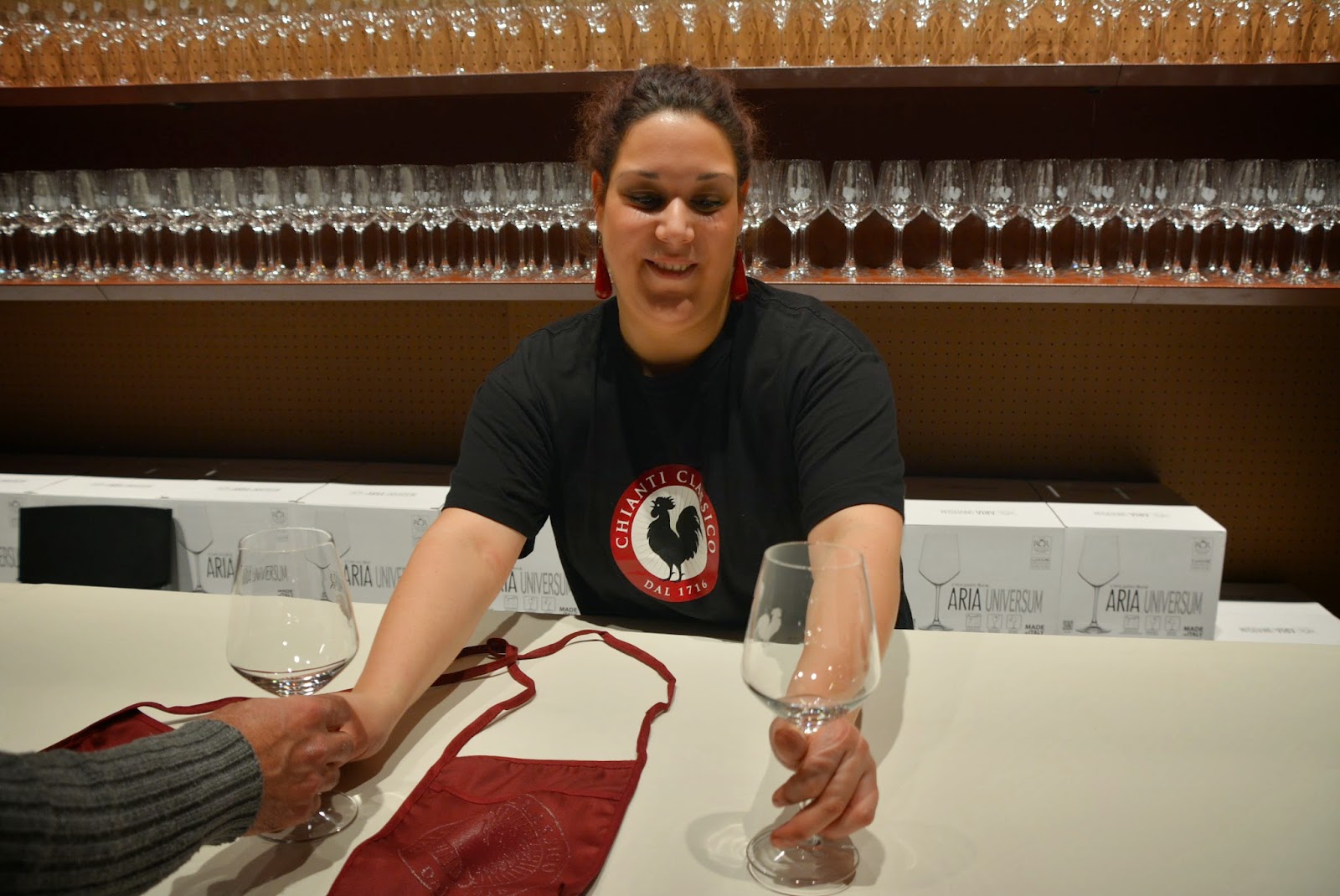 If you are VIP, you may get to sit here and taste (but profs spit so that's not much fun) 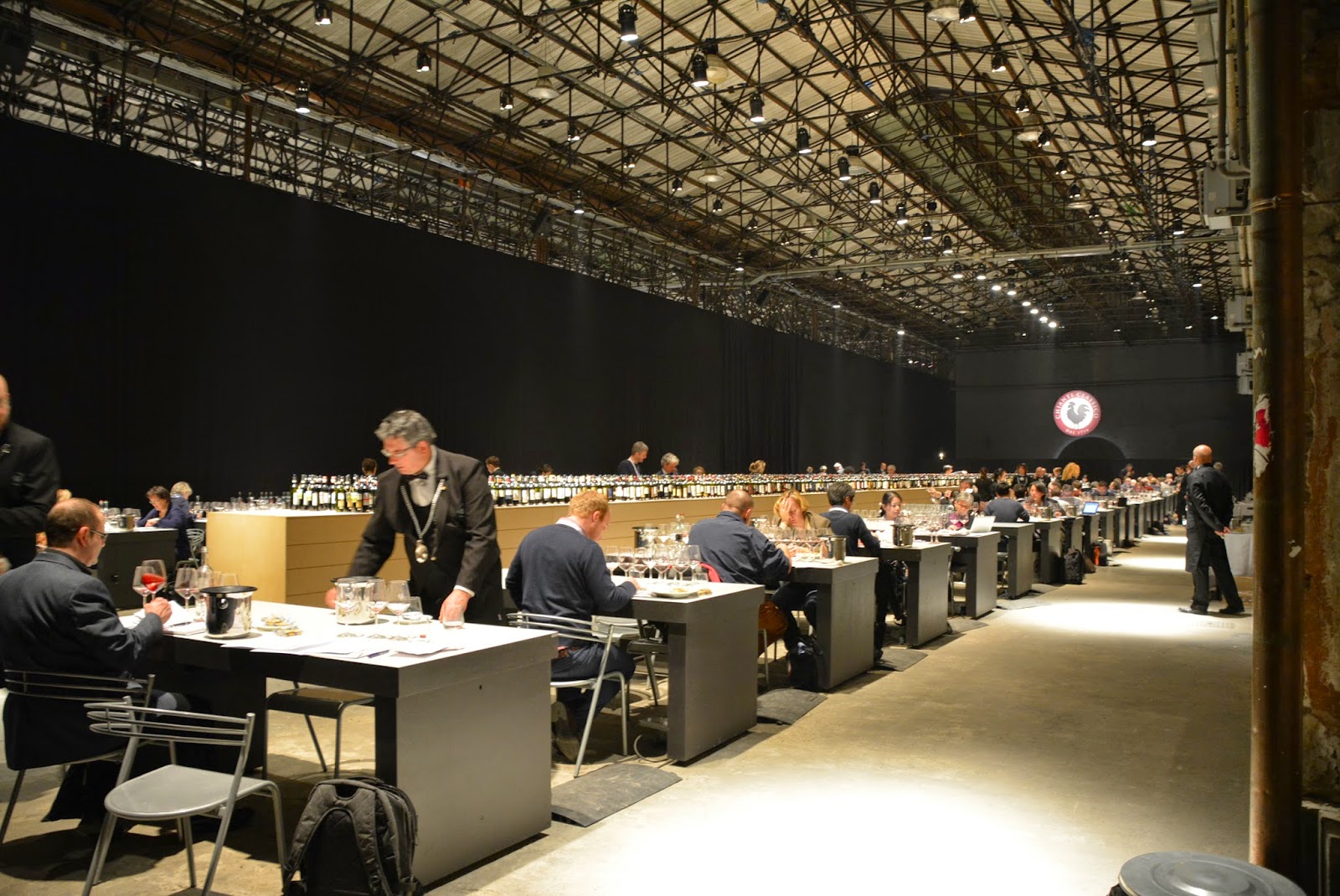 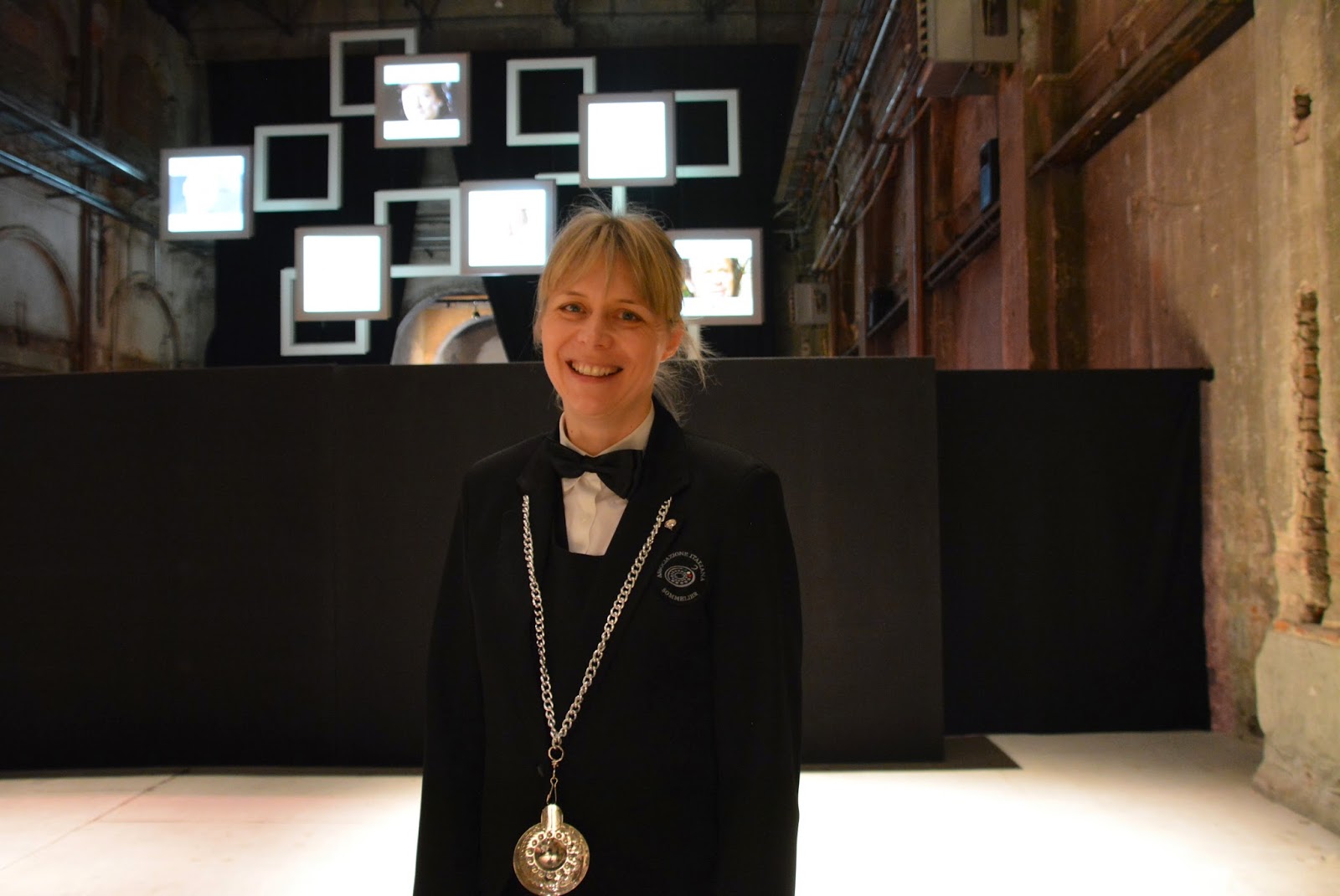 Here we are ready to attack the wineries! 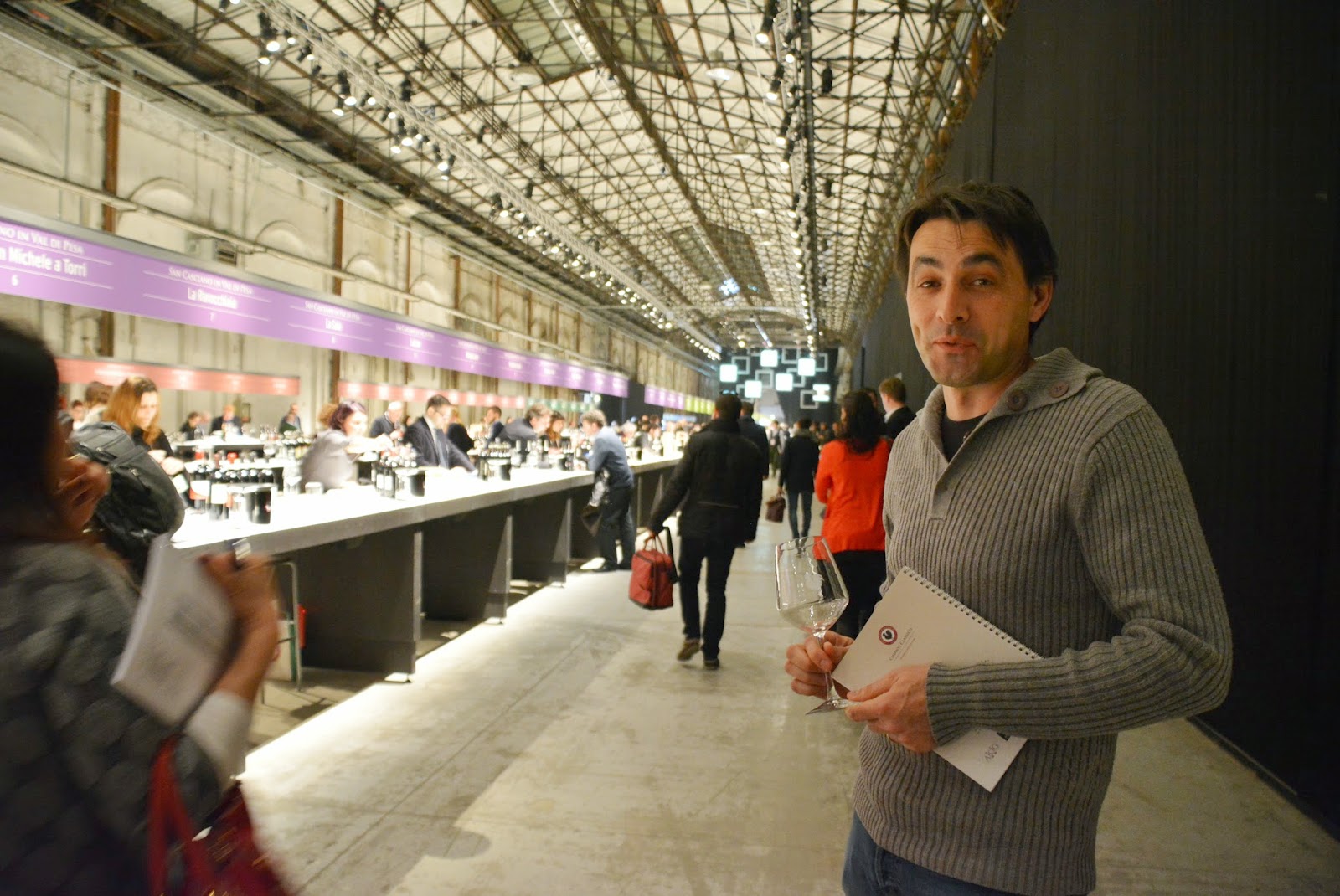 Tasting the new vintage at Monte Bernardi with Jennifer & Michael 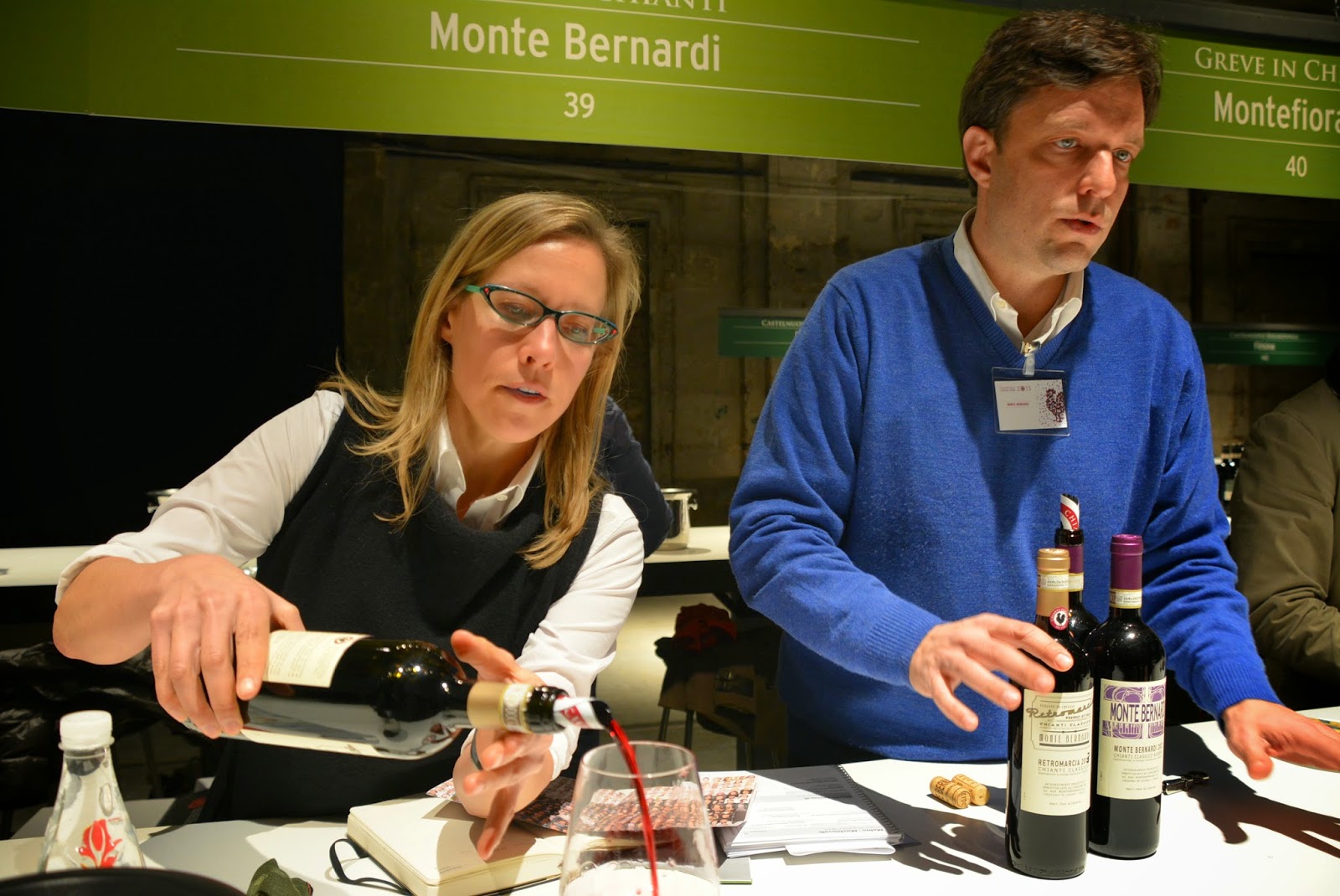 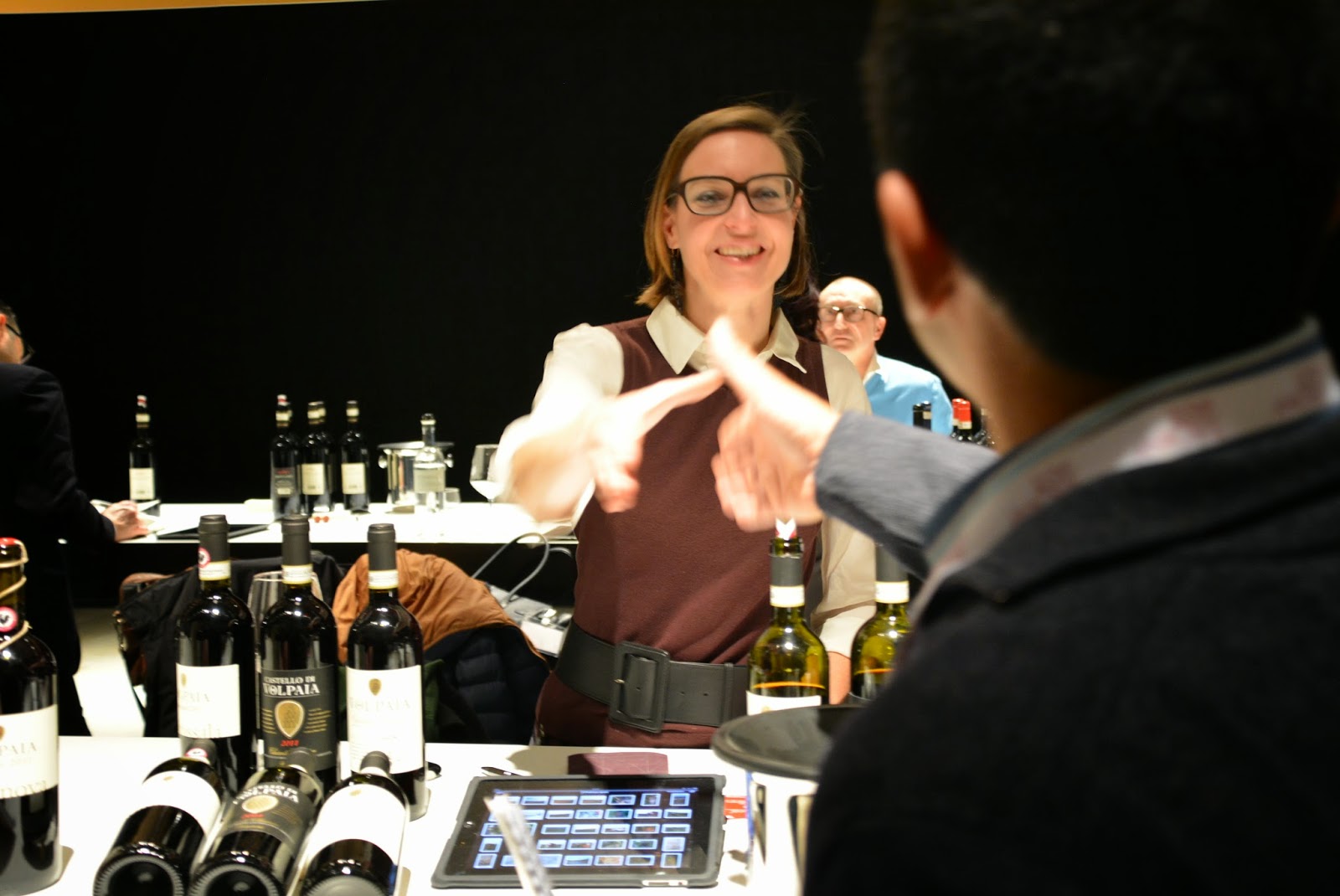 You'll meet Silvia normally at Corzano & Paterno where we go on our Super Chianti tour. Here she's showing the DOP Chianti Classico olive oils from 2014. A few good ones even if the harvest was bad. 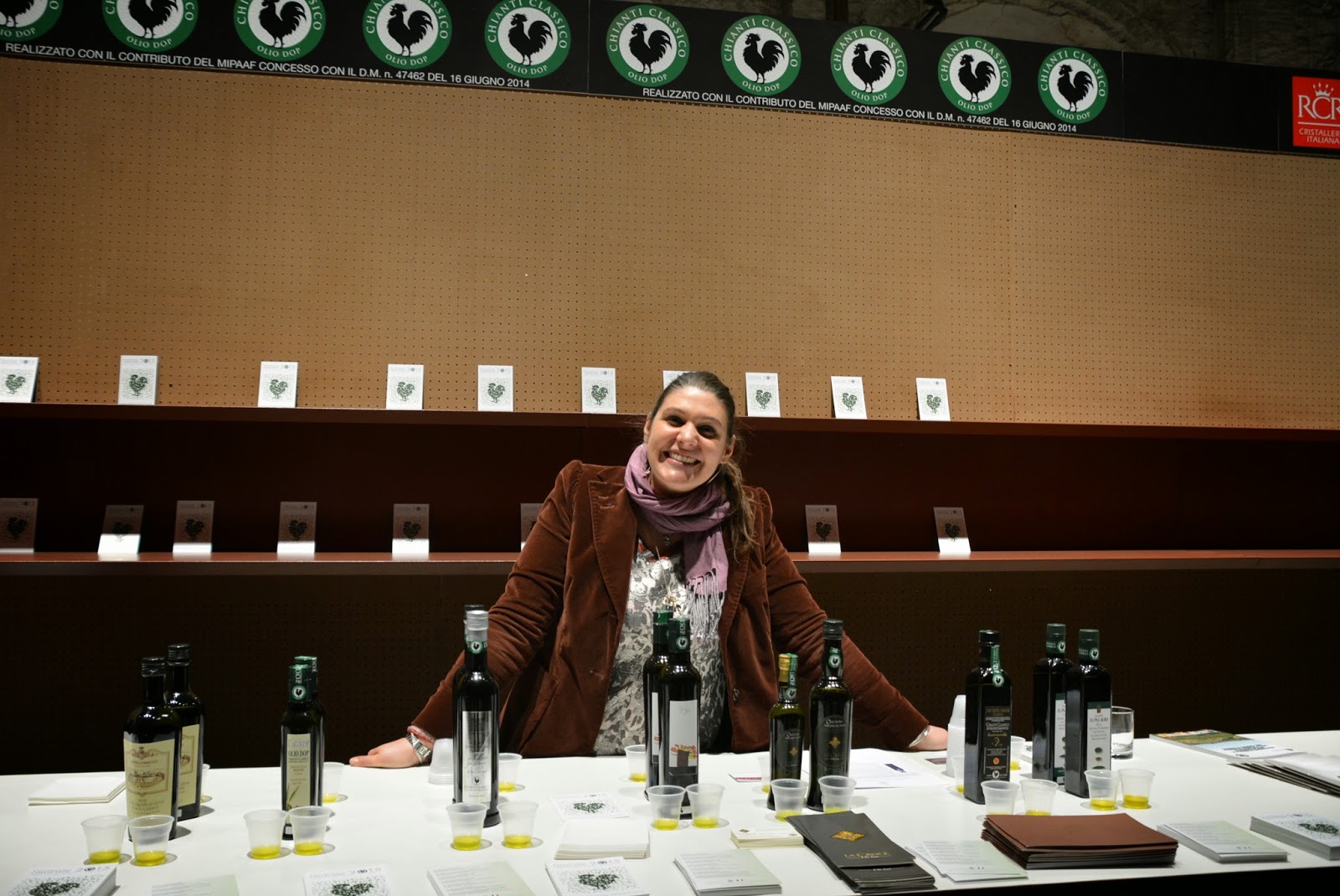 Bumping into Bernardo who's been tasting all day (I assume by the color of his teeth!), winery consultant & Grape Tours tour guide! 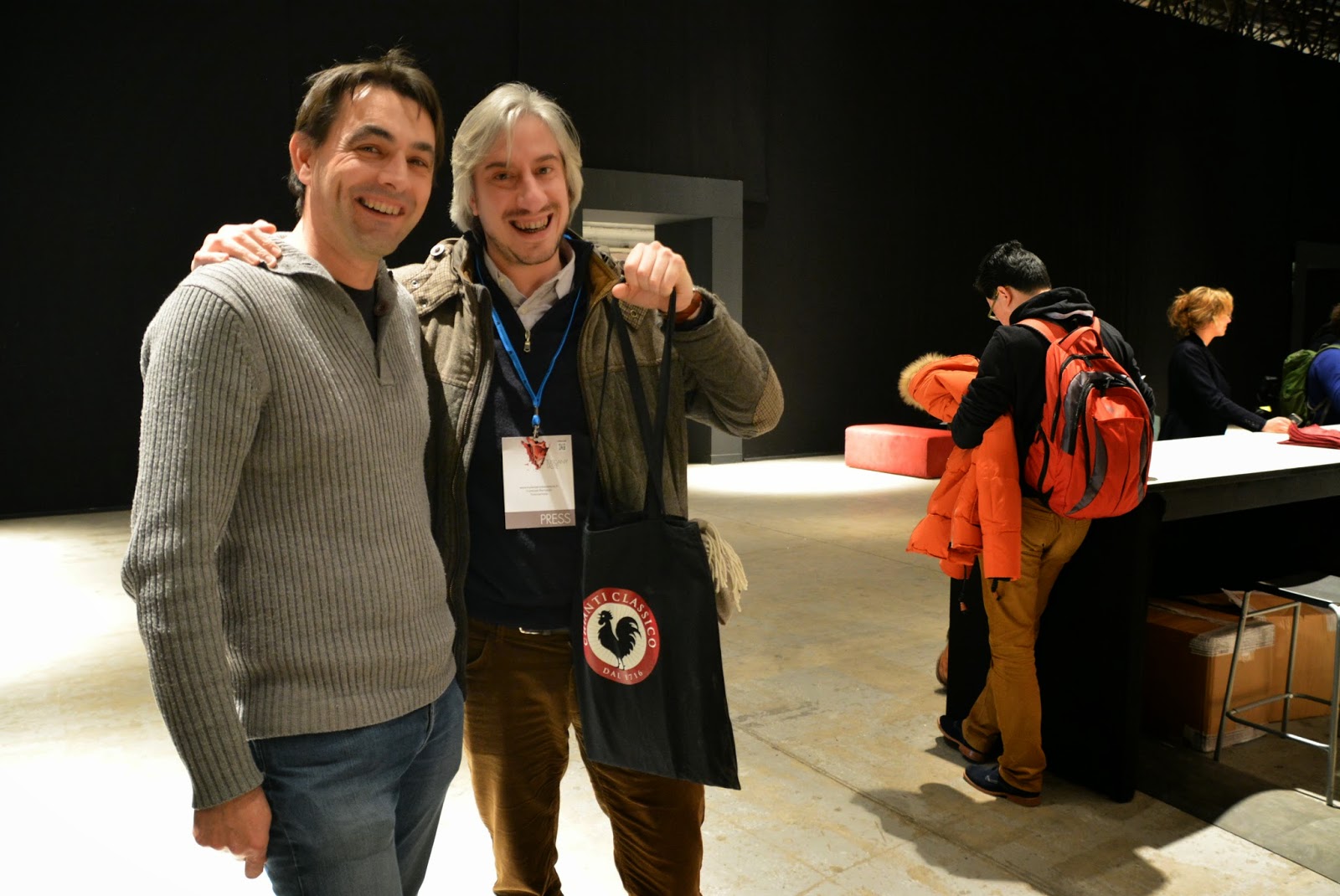 It is in occasion of the yearly expo in Nice this week-end that I thought of giving this category of wine makers a mention. This one in Nice is the first of 6 exhibitions that'll take place throughout France during spring (see the list on their site http://www.france-independent-winegrowers.com/ and join if you happen to be in the area) The fee is a very reasonable 5 euros - or here's a free invite for the one in Nice). Wineries belonging to an association of independent winemakers pour their wines and meet the public.

The association started already decades ago as a reaction of the small growers who were being overshadowed by larger corporations. United makes stronger was the idea, and indeed the term and logo that is now well recognised and appreciated can be used only by members who respect the terms of what the association also stands for:
- Respect their terroir
- Work and harvest their own vineyard
- Make the wine themselves
- Bottle their wine themselves
- Keep viticultural traditions

I love their logo: 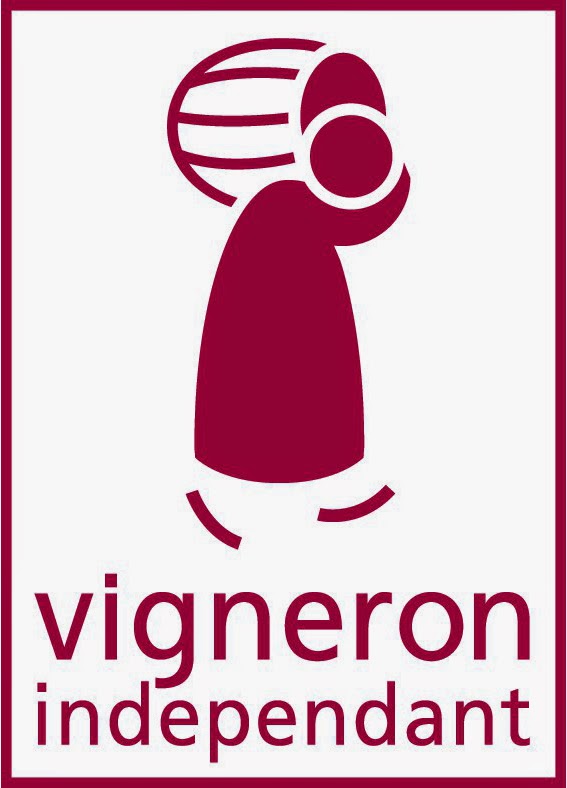 I'ld really recommend that you give this event a go, if you have the chance. You can talk to the wine makers, try thousands of different wines, buy wines and just enjoy the variety that French wine makers have to offer. 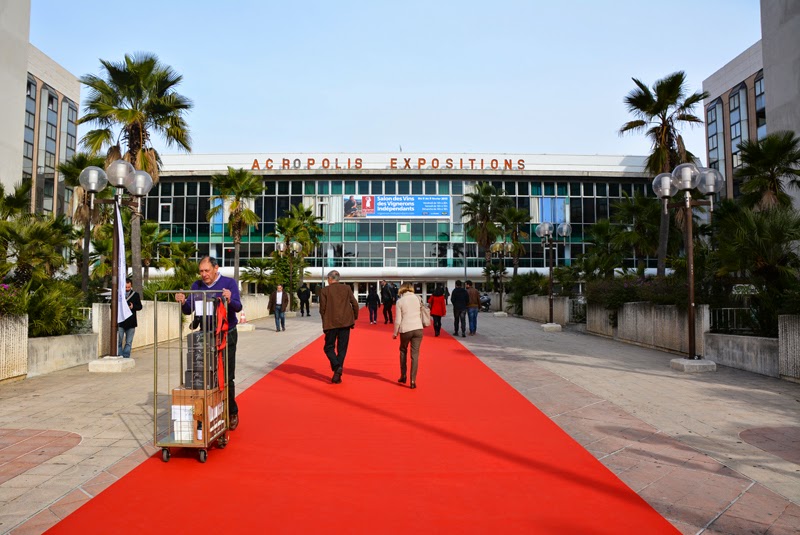 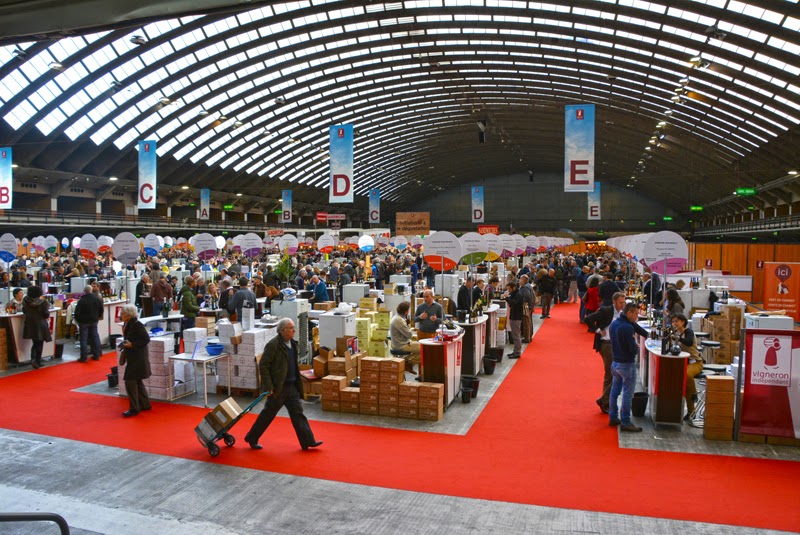 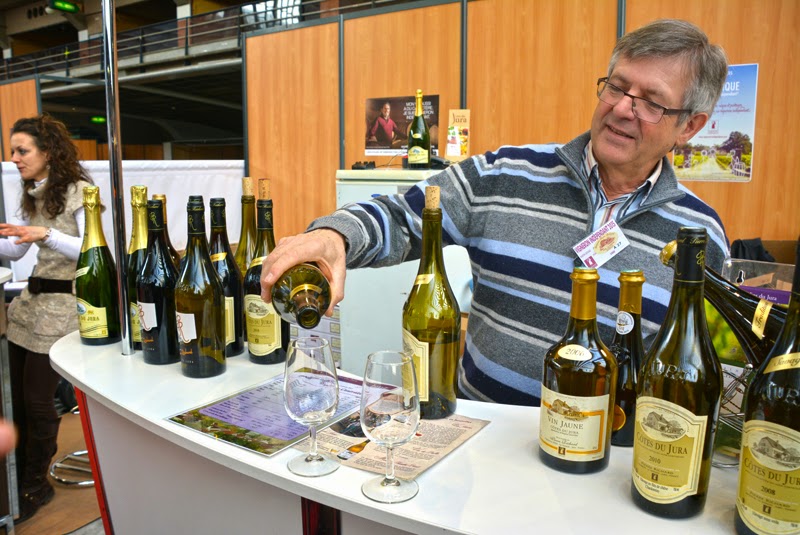 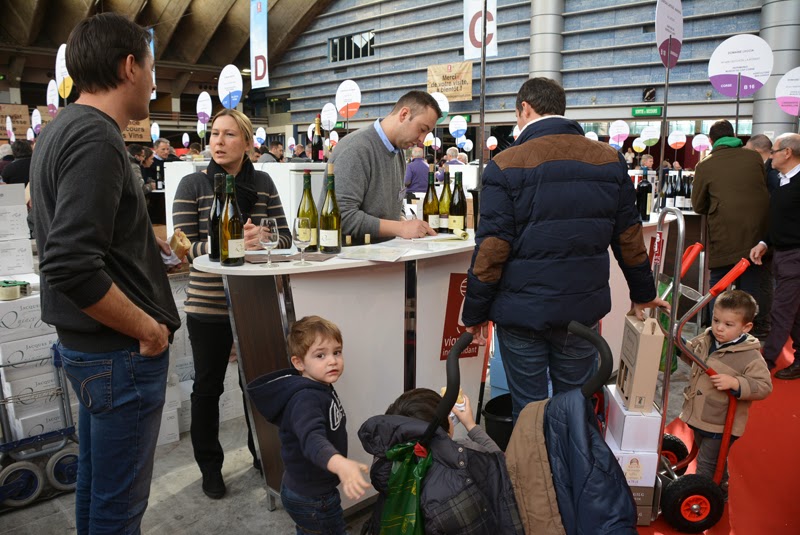 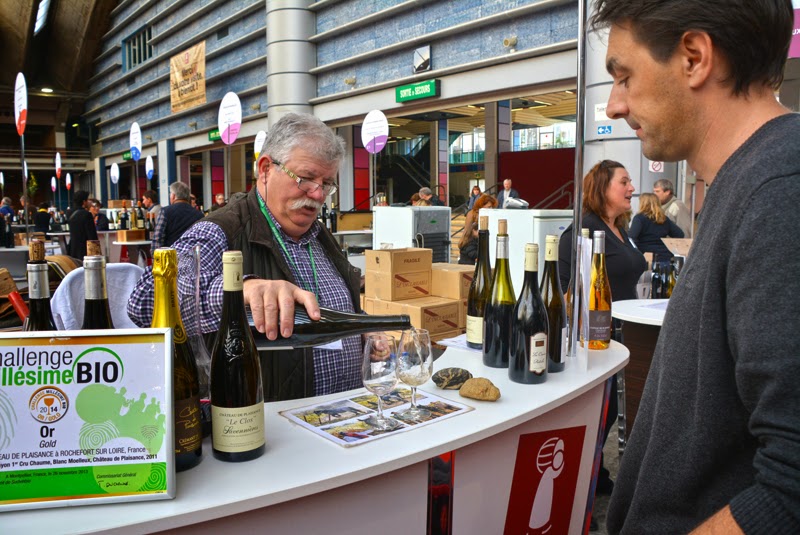 Lately I've stumbled over a symbol très simpathique on a few restaurant doors here in France - one that stands out from other stickers provided by the different guide books or sites. It says "Fait Maison" and means home-made. Now, I do find a bit of contradiction in the fact that one of the countries of strongest culinary tradition and pride has to go as far as to make a law of defining what can be labelled and sold as home-made! But surprisingly the French have been slacking towards the convenience of modern processed foods. A statistic says that 75% of the eateries in French are all but traditional and do not prep their food from scratch. I wasn't too shocked about reading this number as I've been unpleasantly surprised with the amount of fast-food restaurants on offer. And the other end of the spectrum comes at a prime price.
So whatever happened to the reasonable home-cooked meals? Well, there should be a revival as public consciousness arises and value is given to original quality ingredients.
Of course "Fait Maison" can be bastardised as many other concepts that have come around to distinguish restaurants have proven to be fail-proof. According to the decree a "home-made dish is made with products that have been sliced​​, cut, shredded, chopped, cleaned, boned, skinned, skinned, cut, ground or powdered, smoked, salted, chilled, frozen or thawed." Certainly someone could sustain a product was frozen hence home-made!
In any case, it's a good thing that awareness is being put out there and I think the concept should perhaps expand its borders to other countries suffering from industrialisation of their food offers?!

For me the biggest disappointment in going to a restaurant is if I detect the food wasn't home-made or even just partly. Second to that is a chef who does home-made stuff but can't cook! (happened to us last week, so recent in my mind but just serves to illustrate that that isn't the worse offence).
I see it this way, if I go out and spend many-fold of what I'ld spend on my own home-cooked meal - I want an experience and I want it first to be good quality and then perhaps different (hopefully better) from what I would make myself. Anything else is a waste of time & money!

Here's a couple of dishes in good "home-made" restaurants this past week in Nice. They were very good and eye-catching, too. 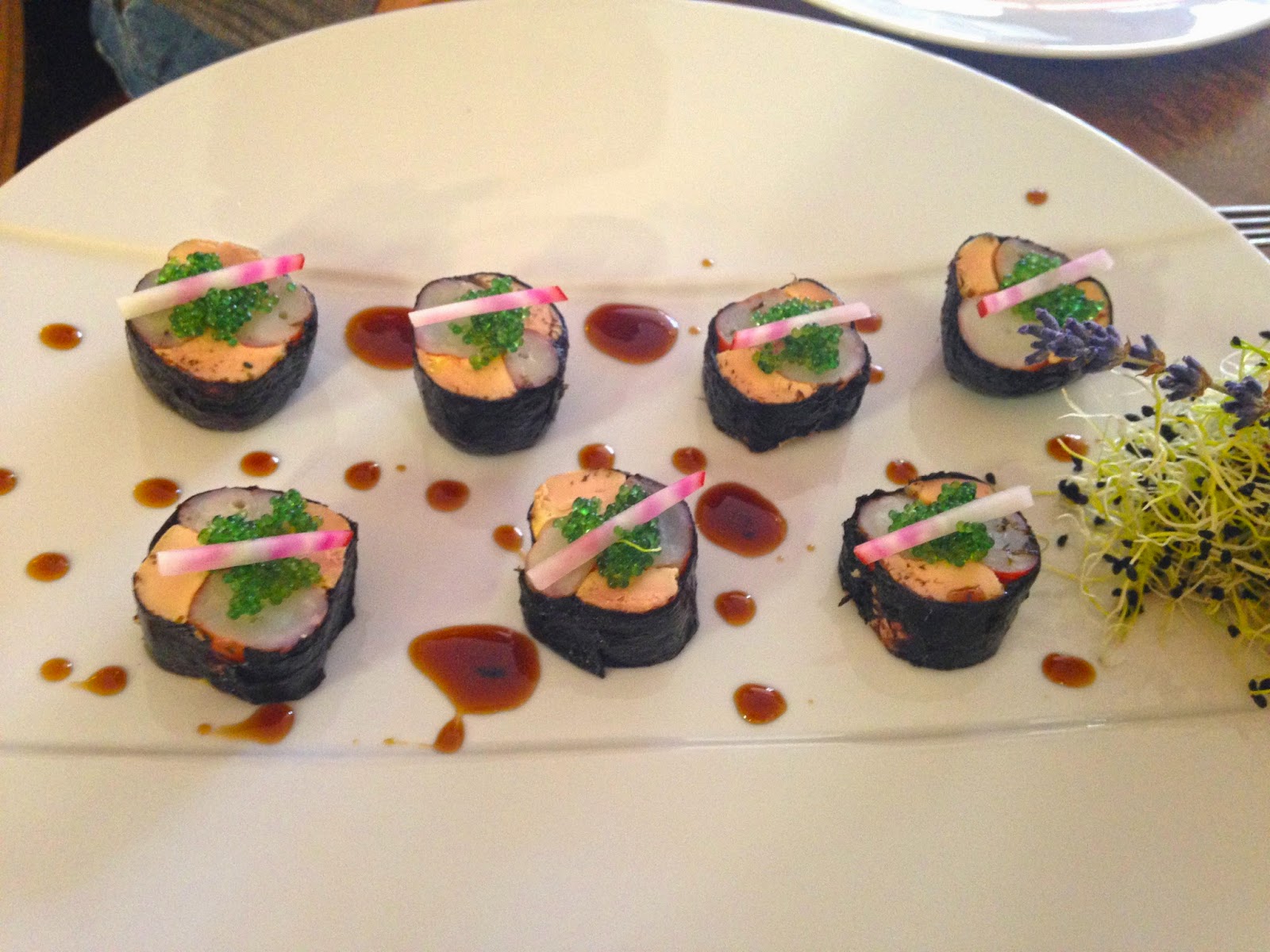 (cod made yummy on leeks and fish sauce) 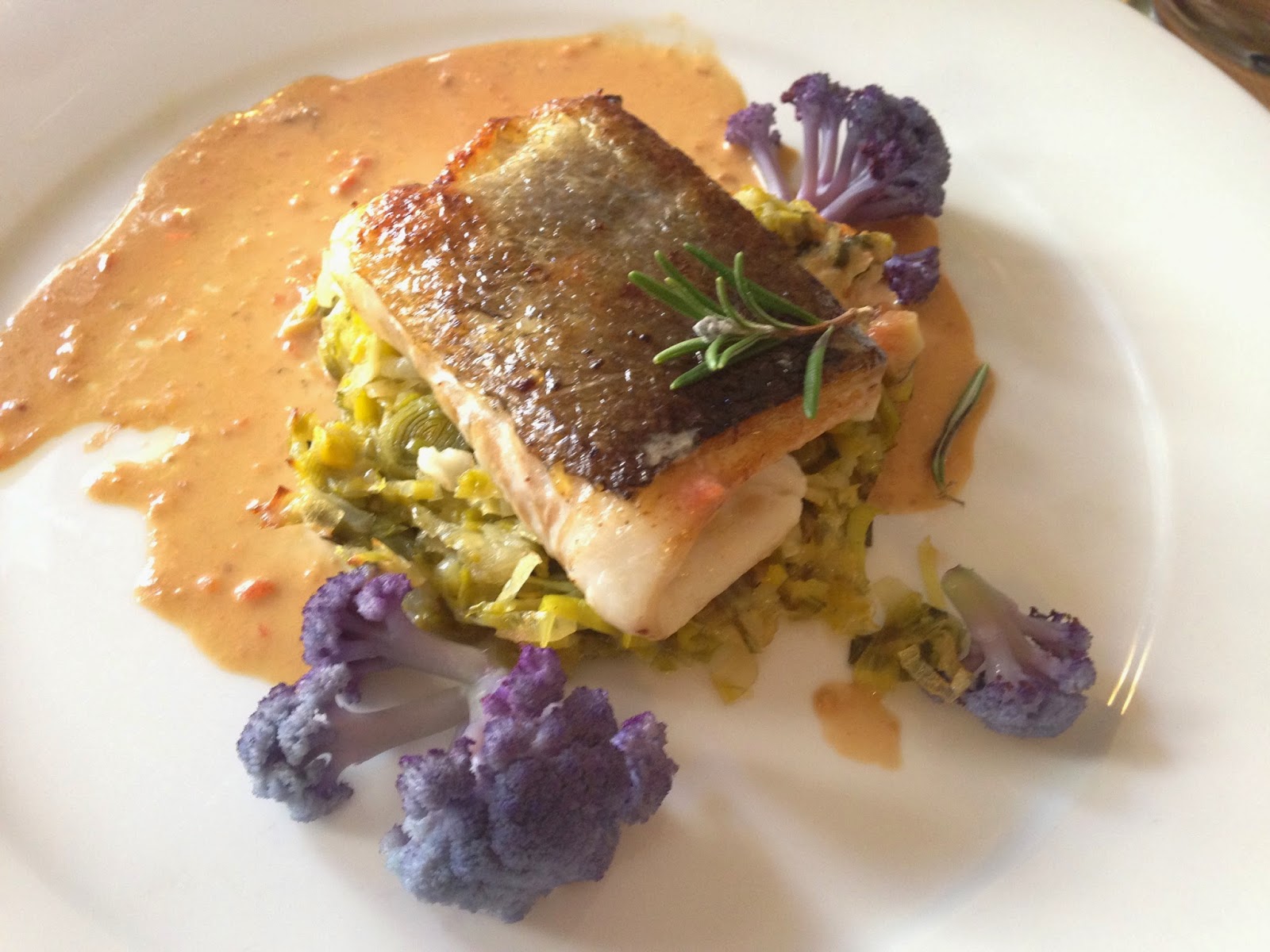