OMG, I'm so excited for our new olive oil - it is absolutely delicious. We produce it together with the legendary Franco Bardi, one of the best olive oil producers in Tuscany. Our selection will be upgrading to the organic label this year - just a matter of mere bureaucracy but a sure upgrade of our selection and to show you how much we care about getting the best olive oil to you.

This past weekend we went to check on how the harvest is coming along. In fact, it's almost done and the olive oil is being bottled, labeled and will as I write and as usual it will be ready to ship out by mid November. The yield is around 12% this year, but the quality of olives & oil is as good as can be.

Our olive oil is made only from the olive trees grown around the hills of Trequanda (Terre di Siena DOP) and is a mix of the cultivars Frantoio, Leccino & Olivastro Seggianese. Remember that you can order your half litre bottles (min 6 per shipment) on this site: www.olivoglio.com 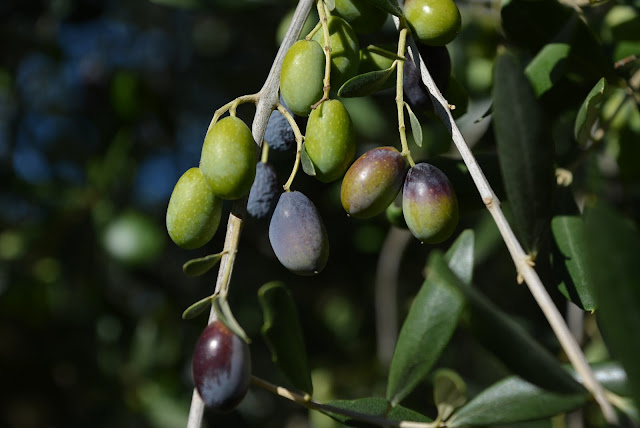 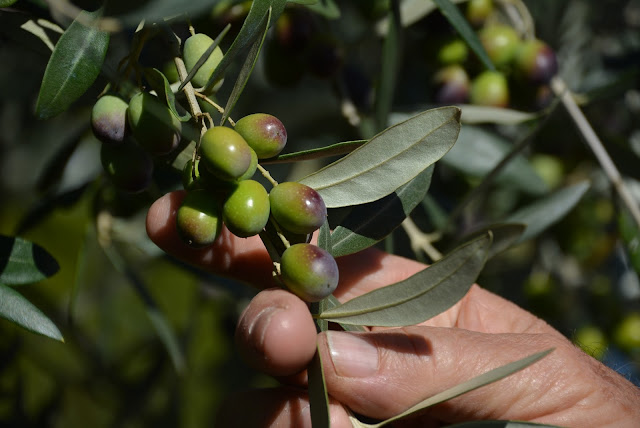 Collecting the olives after raking them off the tree 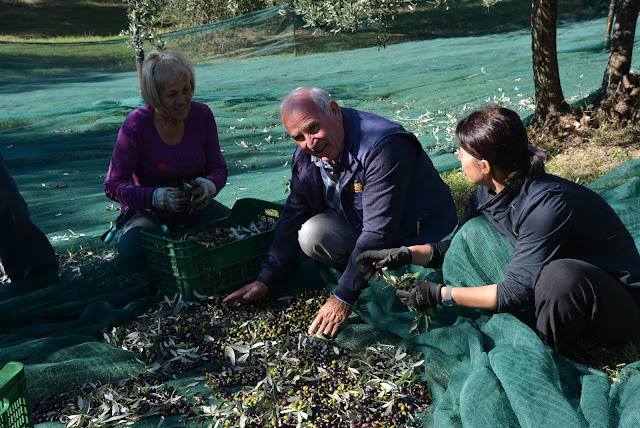 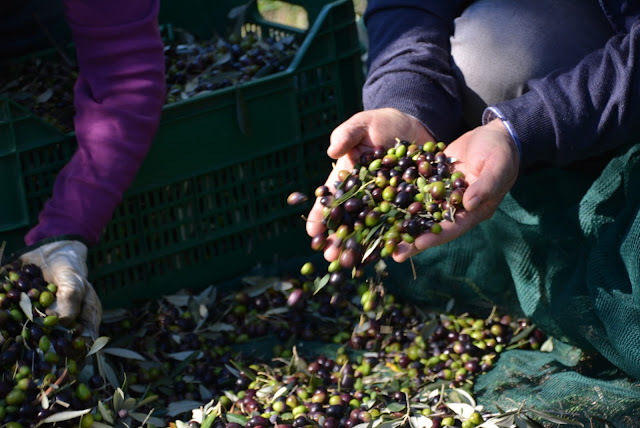 Collecting the olives in boxes for crushing the same evening 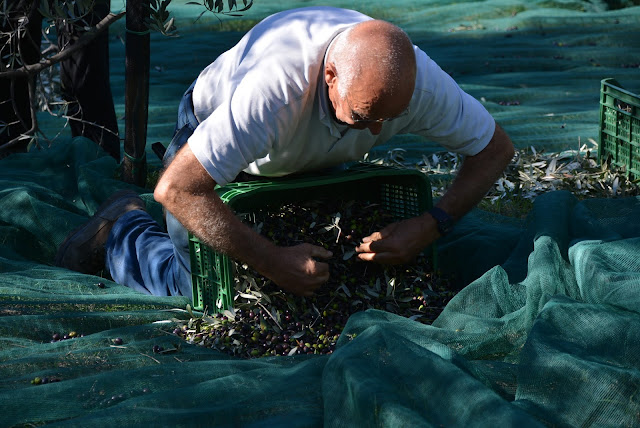 Educative outing for the whole family 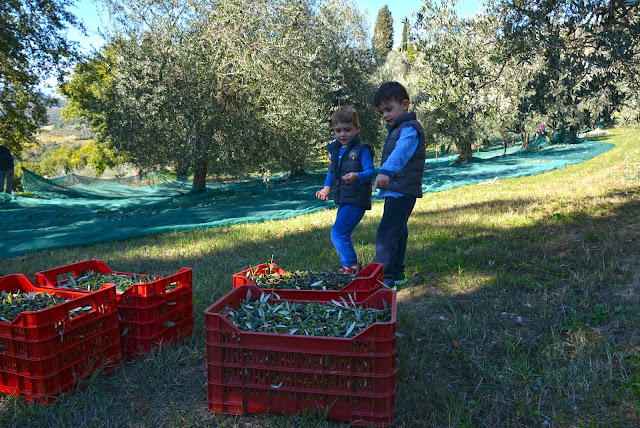 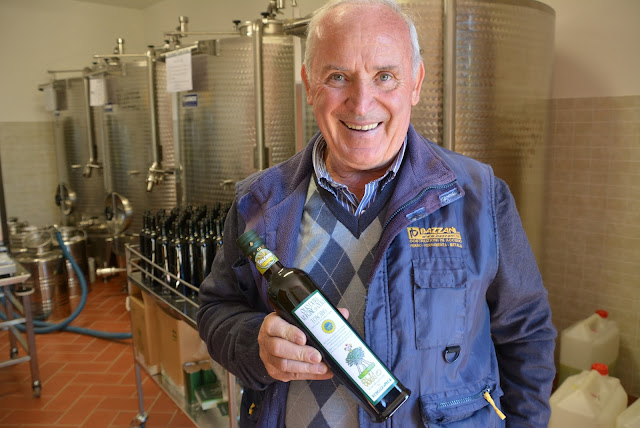 To beef or not to beef?!

The "beef discussion" is one that rolls alongside the one of wine in Tuscany, because most wines are made to accompany the prevalent meat diet! And Tuscany is definitely a meat-haven as soon as one gets inland towards Florence & Chianti it's proposed on every menu, usually grilled but often also in other vests. However, there's quite a lot of fuss made over what kind of beef is served...a lot of places advertise they serve the locally grown Chianina Igp, whereas most are probably serving beef from France, Poland, Argentina and other countries that is much much cheaper.
The Chianina is a specific Tuscan race that the region and its local foodies prides itself with. Almost extinct at one point because used to work the fields in the past, it found it's second revival in later years for its precious meat. But there isn't much of it and even though it's an "Igp" protected meat, by the time it's served in restaurants clients will have no way of knowing how authentic their meat actually is.
Truth is that Chianina is quite rare and pricey. Most restaurants in Tuscany, especially in touristy areas, are probably not carrying it.
Animals live pasturing outside most of the year and are given plenty of space. They often live to be over 10 yrs old, and the meat is left to dry for around 4 weeks.
Here's a recommendation to go see them when you are in Tuscany (area of Montepulciano to be more precise). A farm to table kind of place with animals, a butcher shop, and a restaurant serving the most divine burgers (made 40% from veal, 40% from older animals, 20% cinta senese pork): La Toraia.
I'm sort of twisted in sharing this because it's such an uncontaminated sort of place, I would hate to see it ruined with hoards of tourists but then again how could I keep it for myself?!?!
As for when you visit the touristy places, your choice is not as obvious and even the food experts seem to have trouble finding the real Chianina or where the "Bistecca alla Fiorentina" is just served true to tradition (see Romanelli's blog Quinto Quarto where he mentions it often - only in Italian, sorry).
Here's a few rules for the Bistecca alla Fiorentina (as you see it in our butcher's hands in one of the photos beneath):
- it has to have the sirloin and filet
- it has to be at least a kilo (2 pounds), thick and served "al sangue" (pretty much blue)
- the only condiments are olive oil, salt (maybe aromatic salt) & pepper

Remember that the Bistecca alla Fiorentina doesn't necessarily have to come from Chianina, but if the restaurant declares it as such then "yes" it should and you should be able to ask for its origin and Igp certificate. 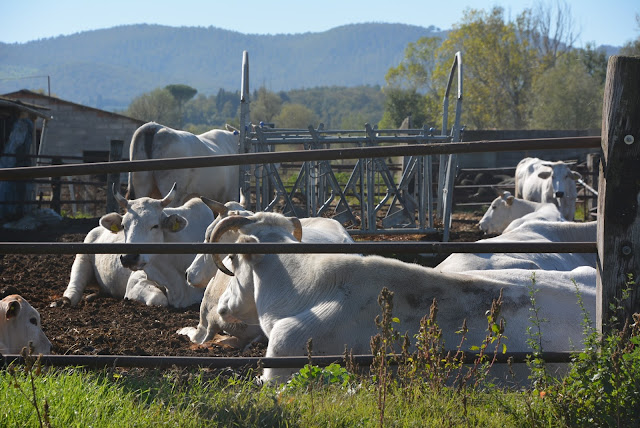 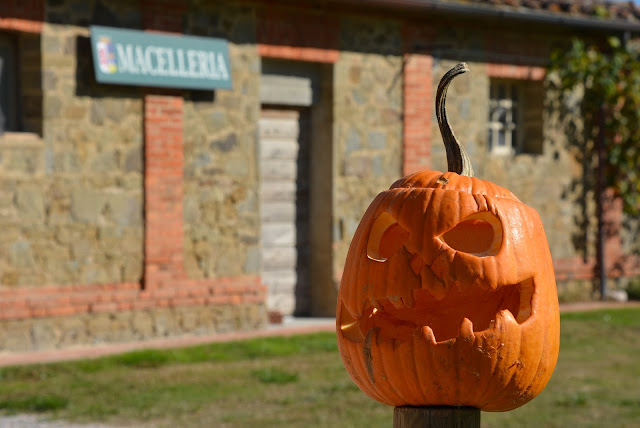 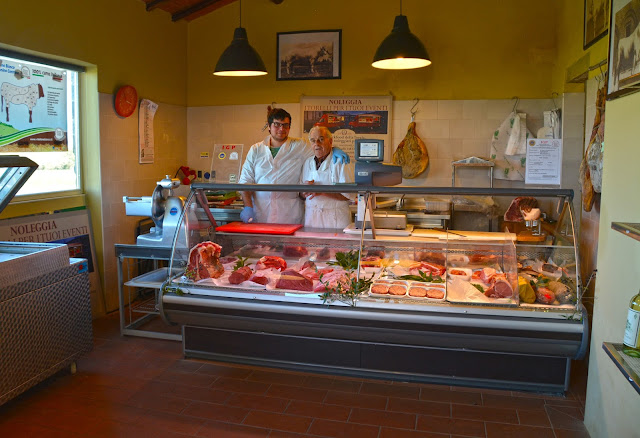 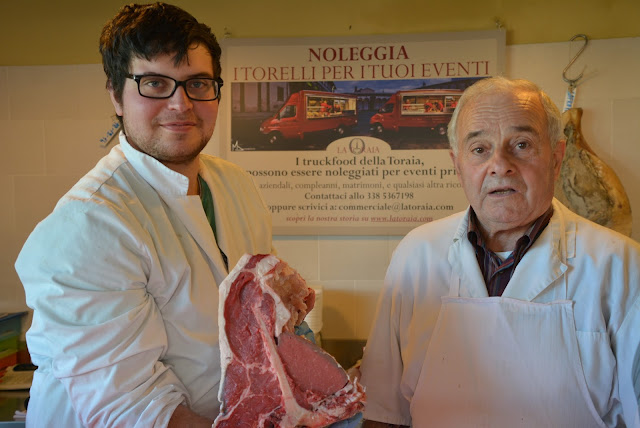 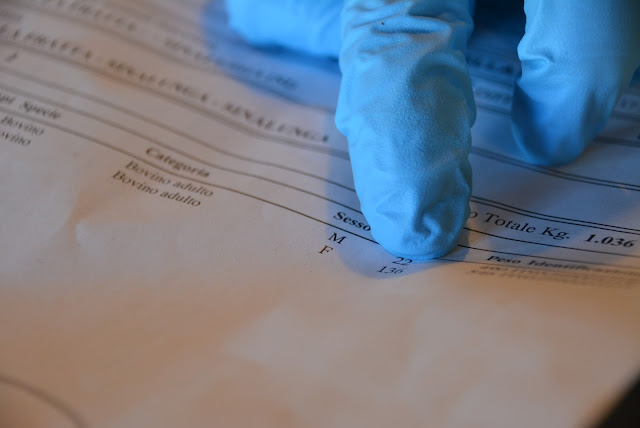 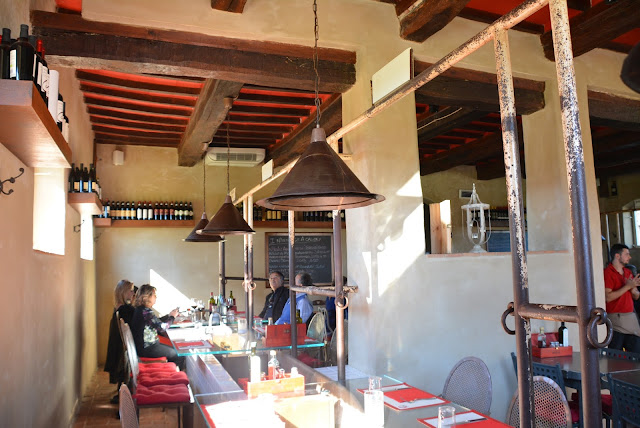 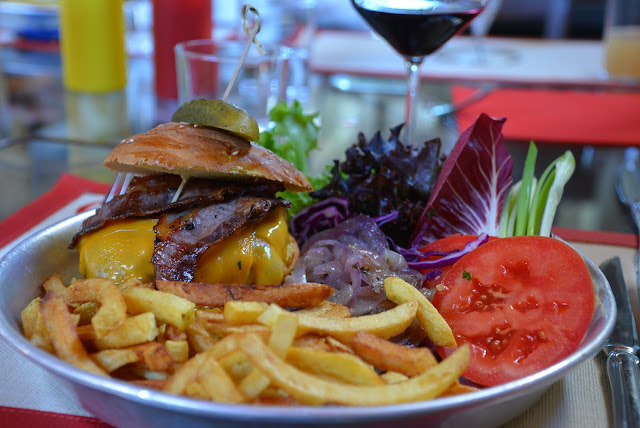 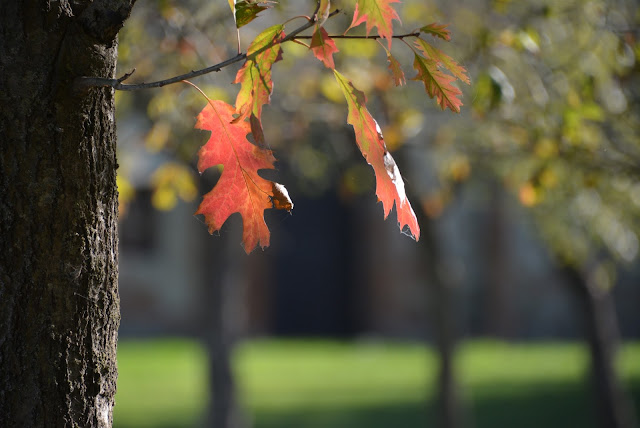 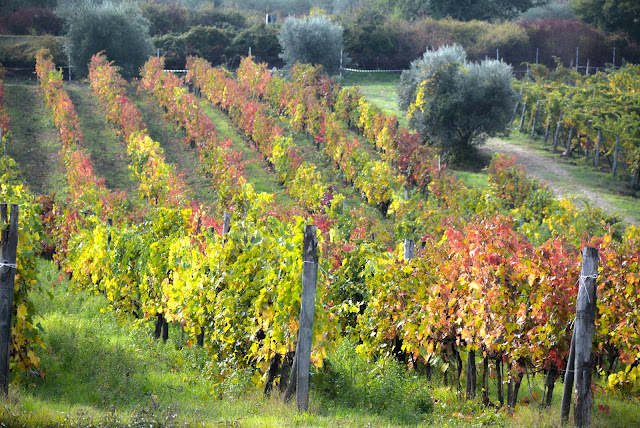 Elba is the name of an island that spots the Mediterranean between the Tuscan Coast to the East (or Etruscan Coast as the wine trail is called) and Corsica to the West. Elba is known for Napoleon's exile & extraction of iron metals in the past, and nowadays hosts loads of German tourists & one of Tuscany's DOCG wines called Aleatico dell'Elba Passito (the two facts are absolutely not connected in any way).

So nowadays the island serves mostly as a beach destination, making it extremely seasonal and this is quite noticeable since we're visiting in mid-October. If restaurants/accommodations are not already closed (a lot are), the attitude seems to be that they wish they were! So we are making the best of it, and luckily the weather is beautifully sunny and comforting.

Our quest is as always wine - and decent food. Most of which we are able to find with a bit of research. This time we are challenged on both edges, because the aforementioned season is low and most restaurants are closed - plus last year's harvest was challenging so very little wine is to be found.
What we've found so far are light whites & reds, the delicious Aleatico (most wineries have terminated their supply though) so perhaps the best time to come is either May/June or September (probably best to avoid the extremely busy July/August) and October is on the limit...winter months to be excluded.

My initial mission was to see the drying of the Aleatico grapes and take some pics. At our first winery visit we learned that all the grapes have already been taken off the drying racks and are now safely wine within the tanks. So now the pursuit has become visiting every winery in Elba (in a couple of days - yeah, I'm ambitious) and buy a bottle of Aleatico Passito DOCG - the flagship wine - only to discover that most wineries are completely sold out. Anyway, mapped out the wineries and you can use my map if you come to Elba in a more favourable season (see under).

ALEATICO is the name of an protagonist red grape variety that thrives in Elba and through a brief drying process on racks under the sun (that we missed by days - see picture of racks under) gives origin to a caressingly sweet and fruity wine that beautifully finishes any meal, and especially does well in the companionship of Schiaccia 'Briaca (special Elban cake means the "drunken flat bread" - see picture under)

My plans are evidently failing, but never mind...we're getting the best out of traveling locally (with 2 very lively kids so making the due compromises required). In any case, this is all part of our studies for our very special trip for the future of which Elba was one of our lesser known areas...

Here will follow my pics of the days - I hope you'll enjoy - and perhaps one day we shall discover this area together with you! We offer a completely unique 1-week wine tour on the discovery of the Etruscan Coast that will take you through amazing landscape, areas of Tuscany you probably wouldn't have seen otherwise, and wines that are lesser known (except of a few very famous ones in Bolgheri, of course) so this should be a fantastic trip for any person who simply loves adventure, the seaside, food & wine, great beautiful countryside and lovely company! The 7-day all-inclusive fab Etruscan Wine Tour! 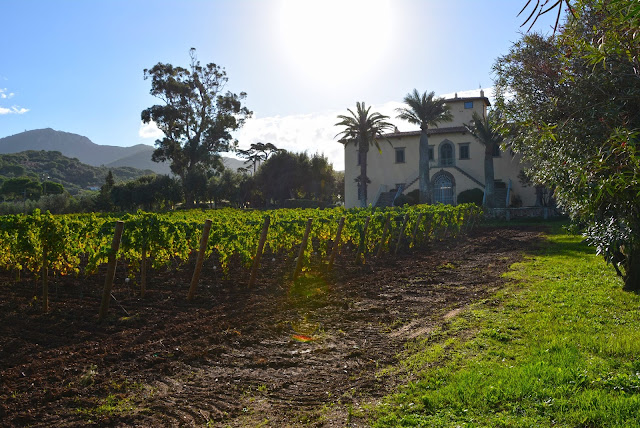 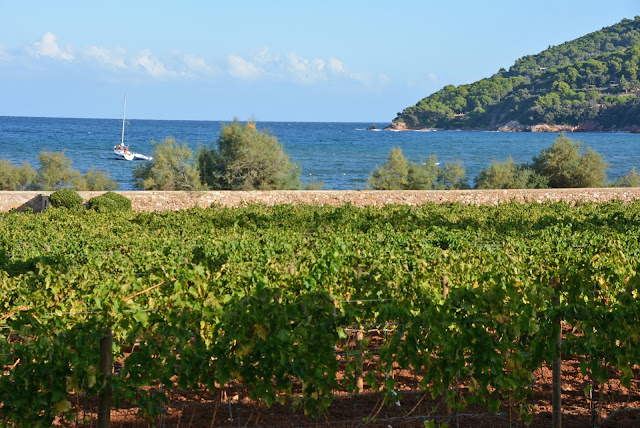 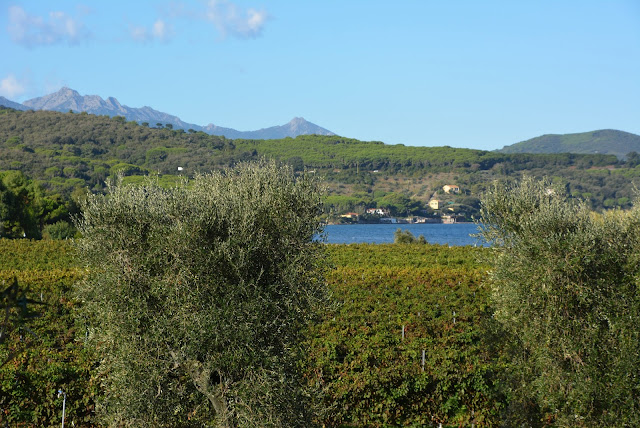 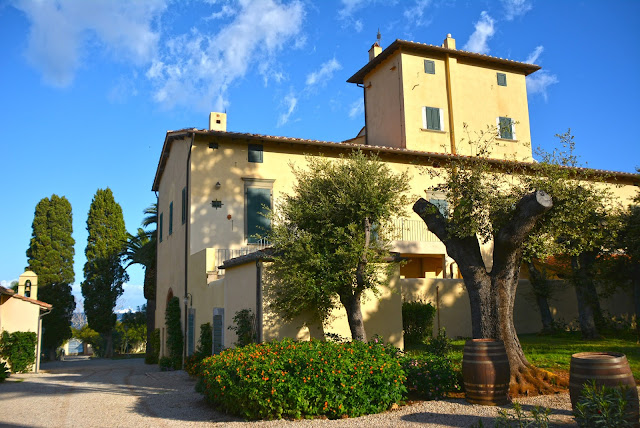 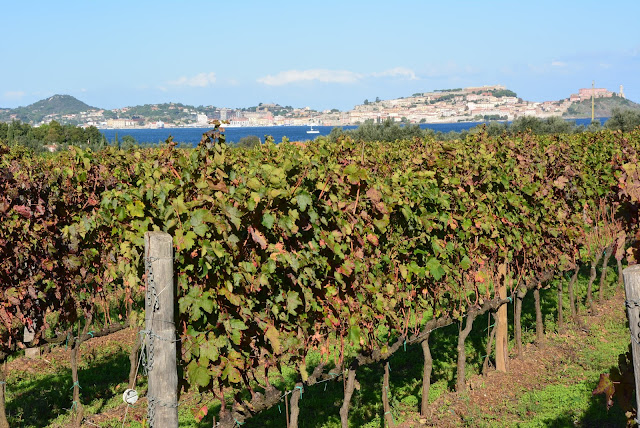 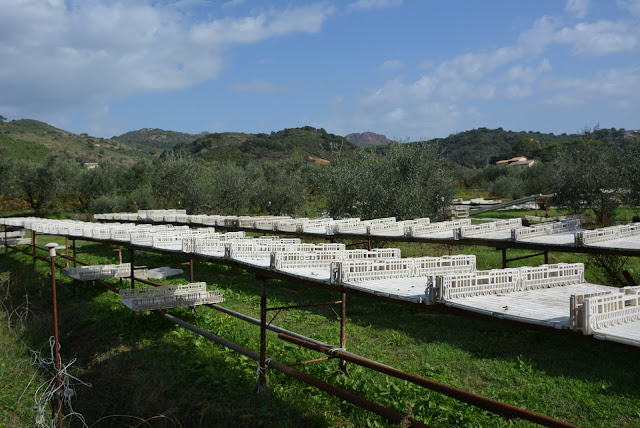 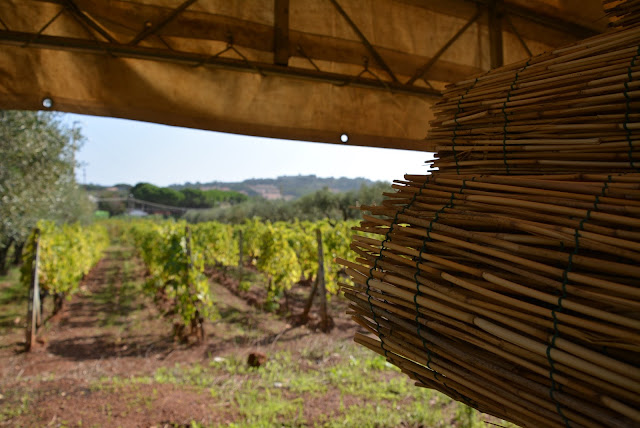 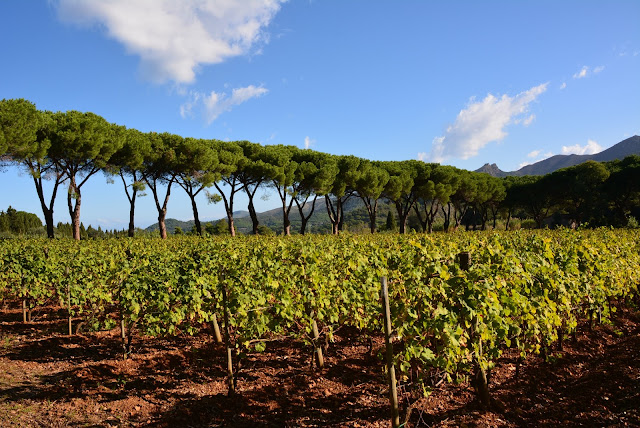 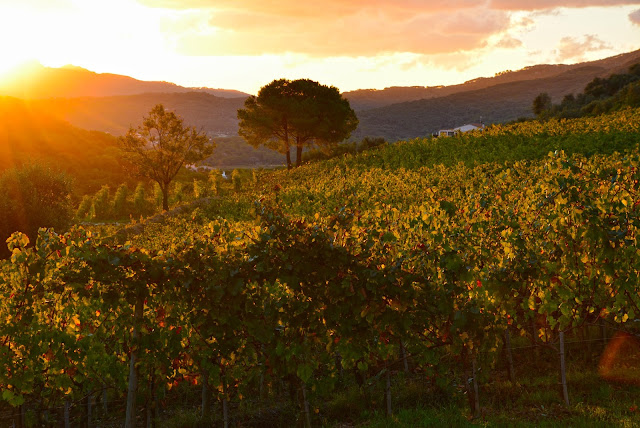 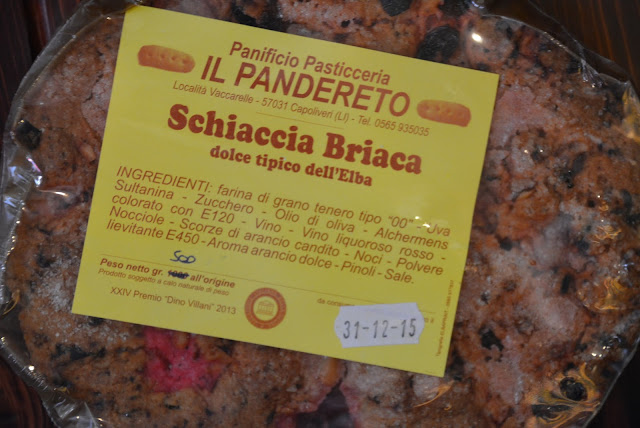 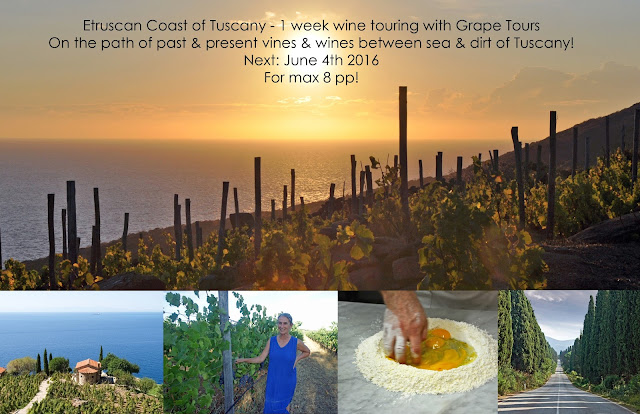